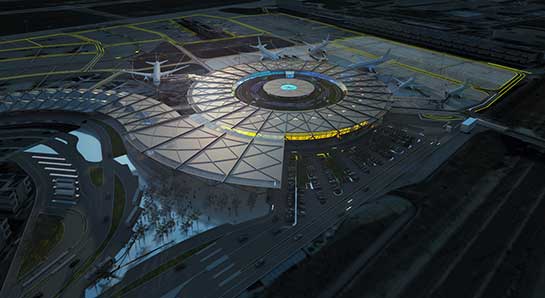 Lyon-Saint Exupery Airport of France has appointed Rogers Stirk Harbour + Partners (RSHP) to design the Future Terminal 1 project, which would support the airport’s strategy to serve 15 million passengers per annum by 2020.

Rogers will design the terminal that should not detract from the already built TGV train station located next to the airport, designed by Spanish architect Santiago Calatrava, while creating a new identity for the site.

The airport is investing €180m into the project, of which €140m will be funded through a loan from the European Investment Bank (EIB).

As part of the project, the metal-fabric unit of Terminal 3 will be dismantled and the exterior areas on the ‘city side’ would incorporate a pedestrian walkway and infrastructures needed for all ground access points.

"The airport is investing €180m into the project, of which €140m will be funded through a loan from the European Investment Bank (EIB)."

The new terminal, which will be located in the extension of the current Terminal 1, will be linked to the existing Terminal 3 satellite through an underground gallery.

Features of the new terminal include a spacious entrance, a hanging garden and large shopping area at the centre, which will augment passengers’ travelling experience.