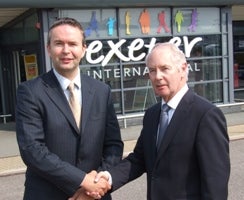 European conglomerate Rigby Group has acquired a 60% stake in UK-based Exeter International Airport from Balfour Beatty for an undisclosed amount.

Located at Clyst Honiton in East Devon, near the city of Exeter, the airport is considered to be the most important aerial gateway to and from the south-west of the UK.

Rigby Group chairman Sir Peter Rigby said: "We believe in the importance of regional airports and of their value to the local and regional communities and of their important contribution and place in the local economies."

The airport stake was bought by a Balfour Beatty consortium in early 2007 from Devon County Council for £60m, and posted the airport’s highest ever passenger traffic of over one million in the same year.

Although the airport maintains sound levels of activity on passenger, freight and general aviation activities presently, the passenger traffic steadily declined to around 700,000 in recent years.

Exeter Airport managing director Matt Roach hailed the sale as a positive development for the employees of airport.

"There’s been a lot of speculation recently and this shows the airport has a viable future," said. "We have a new owner that believes in the success of the airport, and for the staff that’s really positive."

"Given the recent fare increases at Bristol airport, Exeter should be able to capitalise."

Balfour Beatty chief executive Andrew McNaughton added: "We are pleased to have come to an arrangement that ensures the future viability of the airport for its staff and the local community it serves."

Rigby Group plans to consolidate the assets of Exeter Airport with British International Helicopters that it acquired in May 2013, to emerge as a leading group in the sectors of regional airports and helicopter operations.

Flybe UK managing director Andrew Strong said: "Given the recent fare increases at Bristol airport, Exeter should be able to capitalise on its position as the premier airport in the south-west and the next few years at the airport look set to be an exciting period."

Image: The acquisition of Exeter Airport is expected to build on the existing strengths of the airport and further develop it in the future. Photo: courtesy of Exeter International Airport.