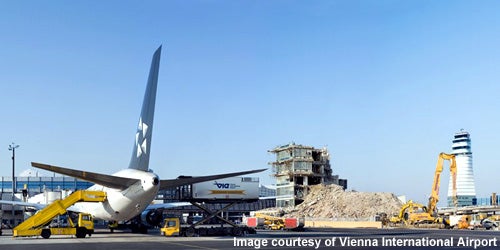 Vienna International Airport in Austria reported a 4.9% drop in its passenger traffic during April 2013 to 1.76 million, mainly due to a general reduction in capacity by airlines.

Cargo traffic at Vienna airport slipped 5.9% to 21,378t during the month, in comparison to the corresponding month in 2012.

In April, the airport’s Eastern Europe and Western Europe passenger traffic dropped 6.4% and 2.6% respectively, while traffic towards the Middle East rose 15.3%, over the same month last year.

The drop in traffic was also due to the occurrence of Easter in the month of March, which in turn lowered flight movements and maximum take-off weight.

During the initial four months of 2013, Vienna Airport reported 2.6% decline in its passenger traffic to 6.2 million, with 7% drop in transfer passengers and 0.4% decline in domestic traffic over corresponding period in 2012.

Flight movements and maximum take-off weight during the four-month period declined 6.9 % and 6.0% to 71,511 and 2.4 million tonnes respectively compared to the same period in 2012.

In January 2013, the airport commissioned its newly modernised terminal, Check-in 1, incorporating new check-in and ticket counters, a modern lighting concept and the remodelled ceiling and walls.