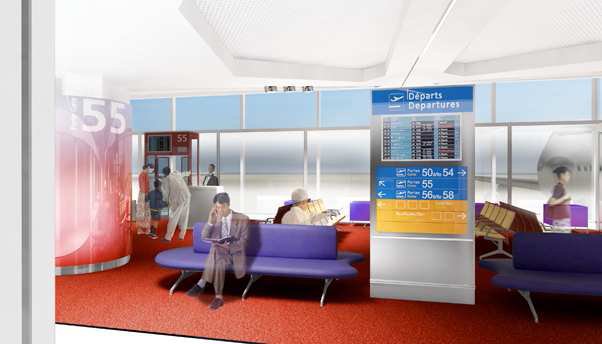 As part of the refurbishment project, 2400m² has been reorganised in terms of space and design, giving extra room for services and retail facilities.

Paris-Charles de Gaulle airport managing director Franck Goldnadel said that over the last few years, ADP has launched a major programme to refurbish the oldest buildings, including the boarding satellites in Terminal 1.

"This refurbishment work has provided the chance to make practical and aesthetic modifications that have a direct impact on the comfort and the quality of service we provide to our customers," Goldnadel said.

"As part of the refurbishment project, 2400m² has been reorganised in terms of space and design, giving extra room for services and retail facilities."

As part of the project, the three old departure lounges have been merged into a single area, which adds space for additional 40 seats and bringing the overall seating capacity to 340.

The revamped complex also features improved security check points with three checkpoint units, which would facilitate access and passenger flow, while a video games area and a music lounge have also been added, along with self-service computers at the Atlanteam workspace.

ADP revealed that the completion of work at Satellite 5, which has been revamped as part of project to improve all the seven satellite lounges, will be followed by revamp of Satellite 6, which is anticipated to open in June.

The airport is scheduled to open the revamped Satellite 1 in November 2013.

During early June 2013, the French Government revealed plans to trim down its stake in Aeroports de Paris (ADB), by selling off its shares worth about €690m.

Image: The revamped satellite complex features 2400m2 of restructured space, along with the addition of new services and retail facilities. Photo: courtesy of Aéroports de Paris.