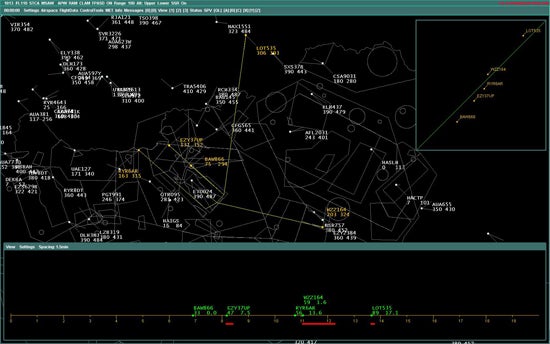 The trial is being conducted as part of a Reduction of Emissions using CDAs and CCDs in TMA (REACT-Plus) project which is one of the nine projects of the third Atlantic Interoperability Initiative to Reduce Emissions (AIRE) cycle.

The REACT-Plus project will be undertaken until 2014, while the trial of CAA and CCD procedures began at the airport on 1 March 2013.

The project is a follow-up of the AIRE II REACT-CR project expanding geographical coverage to Hungary, with an intention to optimise terminal operations by introducing new flight profiles in Budapest.

AIRE III will leverage the insights gained from earlier AIRE demonstration flights to introduce greener ATM solutions and environmentally friendly procedures for all phases of flight to the airport.

MergeStrip is an extension of the Point Merge concept developed by EUROCONTROL, which aims to offer a optimum profile path for aircraft to ensure minimum extra mileage flown.

SESAR said the aim is to accomplish more fuel-efficient climbs and descents through CDAs and CCDs in high-density traffic.

Co-financed by the SESAR JU, the project was launched in June 2012 and involves HungaroControl, low-cost airline Wizz Air andPildo Labs.

All partners are working together to reduce the environmental impact of air traffic in Budapest.

The implementation of CDAs and CCDs is based on the operational introduction of a new ATM tool used since March 2013 by the ATCOs to optimise departures and arrivals.

As part of the project, data for a total of 200 CDA flights and 200 non-CDA flights will be collected.

The project is expected to result in environmental benefits thanks to a reduction in fuel burn between 50kg-70kg per arriving flight.