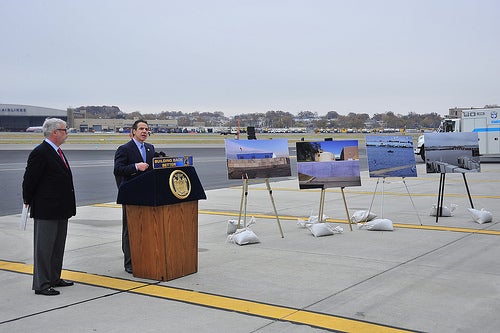 The project, which was announced by governor Andrew Cuomo, will enhance drainage capacity, install flood control measures, and improve electrical power resilience at the airport.

This announcement comes a little more than a year after the Hurricane Sandy flooding led to the closure of the airport’s operations for three days.

Of the total project cost, $28.1m is expected to be covered by federal funds through an award for disaster recovery and mitigation for the Port Authority of New York and New Jersey.

"New York state government is working every day to build back better than before."

Governor Cuomo said: "Hurricane Sandy forced us to re-evaluate how we prepare for, and respond to, major natural disasters in New York.

"The question is not if another storm will hit, but when, and the state is doing everything it can to ensure that New York’s infrastructure is strong and durable when the time comes.

"Projects like these will significantly improve flood protection and electrical resiliency at LaGuardia and throughout the state. New York state government is working every day to build back better than before."

The projects include construction of a concrete floodwall around a substation that is critical to powering the airfield systems; installation of flood barrier berms around another building that houses critical runway and taxiway lighting systems; and construction of gravity drains to supplement the airport’s existing drainage network to remove floodwater from the airfield.

Other projects include replacement of existing generators with larger, more efficient emergency back-up generators, and rehabilitation of the airport’s monitoring and control system for LGA power distribution grid.

Port Authority executive director Pat Foye said: "Under governor Cuomo’s leadership, the Port Authority is making vital changes to key infrastructure at LaGuardia Airport to ensure this critical aviation gateway is open and operating as soon as possible in the event of another major storm."

Hurricane Sandy caused a significant damage to LaGuardia airport activities, as the airfield was flooded with more than 100 million gallons of water from Flushing Bay, and an estimated 250,000 passengers were unable to take scheduled flights during the storm and its immediate aftermath.