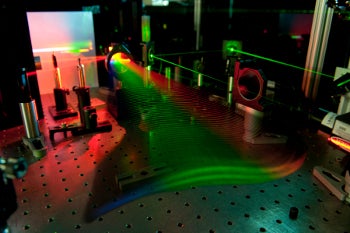 The use of bomb-detecting laser technology at airport security checkpoints can now become a reality, thanks to a new technology developed by Marcos Dantus of Michigan State University (MSU), US.

The new laser can detect micro traces of explosive chemicals in clothing and luggage quicker and more efficiently.

Dantus, MSU chemistry professor, said that since this method uses a single beam and requires no bulky spectrometers, it is quite practical and could scan many people and their belongings quickly.

"Not only does it detect the explosive material, but it also provides an image of the chemical’s exact location, even if it’s merely a minute trace on a zipper," he noted.

The latest laser is expected to be deployed over a conveyor belt, like the X-ray scanners that are currently used for airport security.

This low-energy laser is harmless and can be used on luggage and passengers. For several years, scientists have been trying to develop powerful and safe bomb-detecting lasers.

Dantus’ new bomb-detecting laser works as a single beam with two pulses. While the first pulse resonates with few chemical frequencies found in explosives, the second shadow pulse acts as a reference.

"The new laser can detect micro traces of explosive chemicals in clothing and luggage quicker and more efficiently."

A discrepancy between these two pulses shows the existence of explosive materials.

The idea for the new laser came from a partnership with Harvard University, which developed a laser that can detect cancer, but has the beam output of a normal presentation pointer.

"The laser is not affected by the colour or surface of clothes or luggage," Dantus said.

"Our method has Raman chemical specificity, excellent sensitivity and robust performance on virtually all surfaces."

Funding for the research project was provided by the Department of Homeland Security, Science and Technology Directorate.

An aerospace company has already expressed interest in developing the technology, with additional funding, a standalone prototype to be created in about a year.