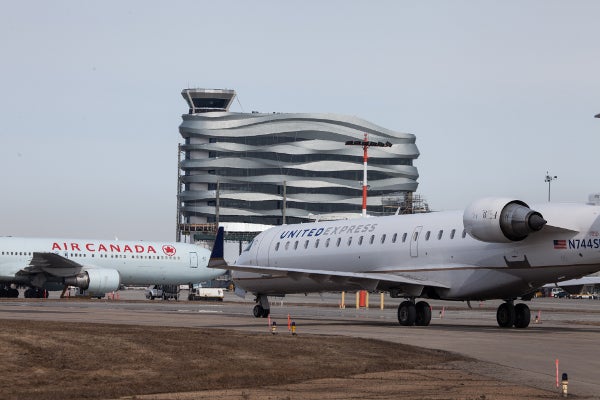 Incorporating the airport's new eight-storey Central Tower, the ATC tower features NAVCANatm technology, which includes NAVCANstrips, and provides controllers with a clear view of the airspace, runways and taxiways through a control tower cab.

"That left space for retail and office space in the middle, which will be home to Nav Canada, EIA and Canadian Helicopters offices," Milley said.

The agency's electronic flight strips system and other integrated air traffic management technology has been commissioned at 70 Canadian sites, as well as being implemented internationally in the UK, Denmark, Australia, the Netherland Antilles, Hong Kong, and Dubai.

Control Tower manager Todd Trischuk said at 48m high, the new control tower is 4m taller than the previous 40-year old tower, and the floor space in the cab is around 50% bigger.

"The extra height improves the controllers' sight lines and the larger area makes it a better working environment," Trischuk said. "The cab is also equipped with new ergonomically designed consoles."

"The multifunctional building includes a new Nav Canada control tower at the top and a new integrated baggage system at the bottom."

Canada's fifth busiest airport in terms of passenger numbers with 6.7 million passengers served in 2012, Edmonton airport is also the eighth busiest when it comes to traffic with around 142,000 aircraft movements per year.

"The airport's expansion, including a well-designed efficient terminal building with integrated office space, was a perfect opportunity to upgrade our air traffic control tower and provide advanced tools and equipment for our employees to continue to provide excellent services from," Kellar said.

"The tower project was facilitated by the airport authority and they gave us excellent cooperation throughout the planning and construction."