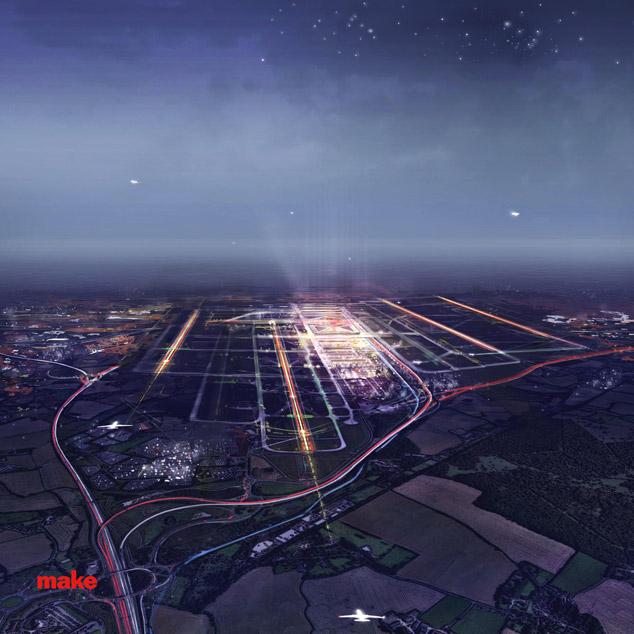 UK based architect Make has proposed a new four-runway plan for London’s Stansted Airport, to replace Heathrow as the UK’s hub airport, amid the ongoing debate surrounding the country’s future aviation strategy.

The self-funded proposal will cost approximately £18bn and generate about up to £100bn in investment in the eastern region of the country.

Make also claimed that the airport will be reachable by central London within 25 minutes, and that by improving the existing infrastructure it will be "one of the most deliverable and affordable solutions currently on the table."

Make founder Ken Shuttleworth said everyone now recognises the need for new airport capacity in order to maintain the UK’s position in the global economy.

"The question remains as to where. The location should be such that it can serve the whole country efficiently for the next century," Shuttleworth said.

"We have proved that Stansted is a viable option, deliverable, affordable and linking to central London in less than 30 minutes, crucially ensuring the distribution of growth and economic development to benefit the national population."

Make is planning to submit the proposal to the UK Airports Commission in July 2013.

The Airport Commission has been assigned to offer suggestions for airport expansion in the UK and it would publish an interim report by late 2013, with short term solutions, followed by a final report in 2015.

Make partner Stuart Blower said the main benefits of upgrading Stansted is that there is no requirement for planes to fly over London which minimises the number of people affected whilst still ensuring the growth in capacity.

"By building on existing facilities and infrastructure, construction and development can be phased if necessary, up-front costs can be reduced and the benefits of existing assets can be maximised through improved surface public transport connections," Blower said.

In addition, the proposals cover improving the existing national infrastructure including the West Anglia Main Line, as well as extending Crossrail 1 and Crossrail 2.

The architecture firm has also studied options including revamp and extension of the Varsity Line to Cambridge, Oxford and beyond, in addition to a potential third High Speed rail line (HS3) linking to St Pancras in central London.

Image: The new four-runway plan for Stansted Airport would cost about £18bn and offers up to £100bn in investment for the east of the UK. Photo: Courtesy of Make.