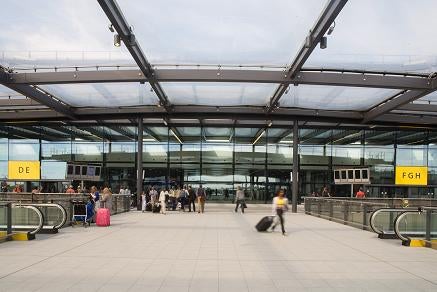 London Gatwick Airport in the UK has reported a 3.3% rise in passenger traffic in September 2013 registering 3.5 million, up from the 3.3 million handled during September 2012.

Passenger traffic on European routes continued to grow at Gatwick, with the number of passengers choosing to fly from London Gatwick increasing by 3.5% to 2.5 million.

In addition to growth across European leisure routes, the airport witnessed a notable increase in traffic to European business routes, in particular to Scandinavia, with destinations such as Oslo, Copenhagen and Stockholm adding over 33,000 passengers.

Traffic to North America, on a like-for-like basis, increased by 4,000 passengers; however, overall North America traffic decreased by 11.6% due to US Airways ceasing services from London Gatwick earlier in the year.

Other long-haul growth increased by 12.9%, and increases on leisure routes to the Caribbean and Africa were complemented by growth on long-haul business routes such as Dubai, China and Vietnam.

"Passenger traffic on European routes continued to grow at Gatwick."

On domestic routes, passenger traffic in Belfast and the Isle of Man increased by 11,800 and 6,700 respectively; however, the traffic increases were offset by the withdrawal of routes, such as Manchester.

Load factors, which indicate how full the average flight was, increased by 1.1% to 85.5% over the same period last year.

London Gatwick chief financial officer Nick Dunn said that despite the increasingly competitive London airport market, Gatwick saw an upturn in travel to both short and long-haul destinations in September, resulting in over 3% growth in passenger numbers.
"This reflects a return to more modest levels of growth compared to the summer months, where growth was higher following the London Olympics in summer 2013," Dunn added.

"Routes to business destinations continue to perform strongly, with growth on European routes being complemented with increases on long-haul services to the Middle and Far East."

Image: In September, Gatwick saw an upturn in travel to both short and long-haul destinations, resulting in over 3% growth in passenger numbers. Photo: courtesy of Gatwick Airport Limited.