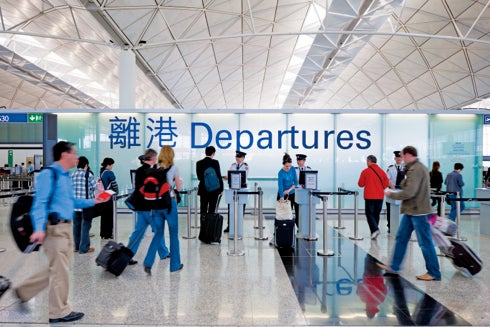 Hong Kong International Airport (HKIA) has reported a rise in both passenger traffic and aircraft movements in April 2012, with rises of 7.8% and 4.8% respectively.

Airport Authority Hong Kong chief executive officer Stanley Hui Hon-chung said the airport is reporting continued growth in passenger volume and aircraft movements, but air traffic performance in the coming months may be under pressure given the uncertain economic outlook.

"Despite the short-term uncertainty, we remain optimistic of the long-term growth and development of the airport," Hon-chung said.

According to HKIA, the traffic growth was attributed to local residents who recorded a 16% rise, while its Japanese, Southeast Asian and Chinese mainland routes further contributed to the increase.

HKIA claims that even though its exports rose 2% during the period, the cargo volume decline was mainly due to a 5% year-on-year decrease in imports, as well as 3% drop in transhipments.

The airport, during the initial four months of 2012, reported 8% yearly rise in passenger traffic to just under 18.4 million passengers, while its air traffic movements rose 6.2% to 114,205. Although, the cargo volume has declined 1.3% to 1.3 million tonnes, when compared to the corresponding period in 2011.

HKIA, on a rolling 12-month basis through April, has reported 6.6% rise in both passenger traffic and aircraft movements to 55.3 and 340,440, respectively, while its cargo declined 5.4% to 3.9 million tonnes.