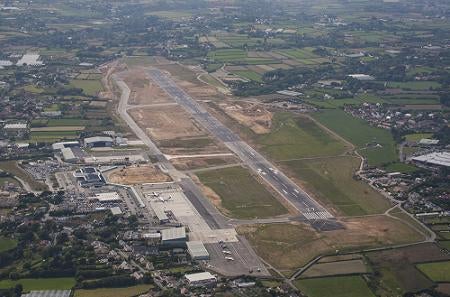 Design and engineering specialist TPS is set to complete an £80m upgrade of Guernsey Airport this October, two months ahead of schedule.

The upgrade, which is being managed by TPS, was originally planned to take 22 months and be complete by the end of 2013; the work began in March 2012.

TPS noted that while the work was hampered by the record rainfall and snow, recent summer temperatures have helped expedite the final phase of construction.

The maintenance and improvement project involved the removal of a historic dip in the runway, construction of an additional 120m runway section and complete reconstruction of the apron area.

The project began in 2012 with the reconstruction of large sections of the runway’s outer edges, by building up the levels in the section with successive layers of asphalt.

Over a period of ten weeks, more than 45,000t of asphalt was used to raise the height of the runway by up to 1.6m, and similar works were also taken up elsewhere on the runway to increase its strength and previously undulating profile

TPS client project manager Gerry Prickett said that the new section of runway added at the western end of the site moves the airstrip 120m to the west, while the existing taxiway also had to be extended to link the western end with the rest of the airfield.

"The new runway maintains its existing operational length of 1,463m but this shift provides longer safety areas at both ends of the runway," Prickett added.

"The project began in 2012 with the reconstruction of large sections of the runway’s outer edges, by building up the levels in the section with successive layers of asphalt."

The other major part of the project involved the complete reconstruction of the apron, the aircraft hardstanding beside the terminal where passengers and crew board and disembark the aircraft.

In order to ensure normal airport operations, the work was implemented in six phases, with two of the phases delivering additional aircraft stands on what were once grass areas.

The final major phase was the bussing of passengers to and from these areas, while a large part of the existing concrete was re-built to greater strength.

TPS has designed the fixed electrical ground power systems for aircraft to connect to when on the apron, and the stand number indicator systems that identify the aircraft parking positions.