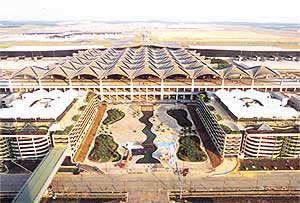 Airports Council International (ACI) has reported a 3.2% increase in worldwide passenger traffic in the first half of 2013.

During the last 12 months passenger traffic growth remained positive, though growth slowed to 2.9% on an annualised basis, due weakening of domestic markets in North America and Europe.

Over the period from July 2012 to June 2013, a flat growth in domestic passenger traffic was recorded in North America and a decline of 3.1% in domestic traffic in European airports.

ACI world economics director Rafael Echevarne said that the loss of momentum in the demand for air transport is inevitable in Europe and North America due to the recession and overall sluggish consumer spending.

"On the other hand, emerging markets remain poised for a continued expansion as they now set the pace for growth in demand for travel as a whole," Echevarne added.

"The loss of momentum in the demand for air transport is inevitable in Europe and North America due to the recession and overall sluggish consumer spending."

Excluding the Middle Eastern region, airports across all regions experienced a drop in freight traffic for the month of June indicated by decline of 1.1% year-over-year.

According to ACI, a sluggish international trade sector and relatively weak business confidence led to the slowdown in air freight.