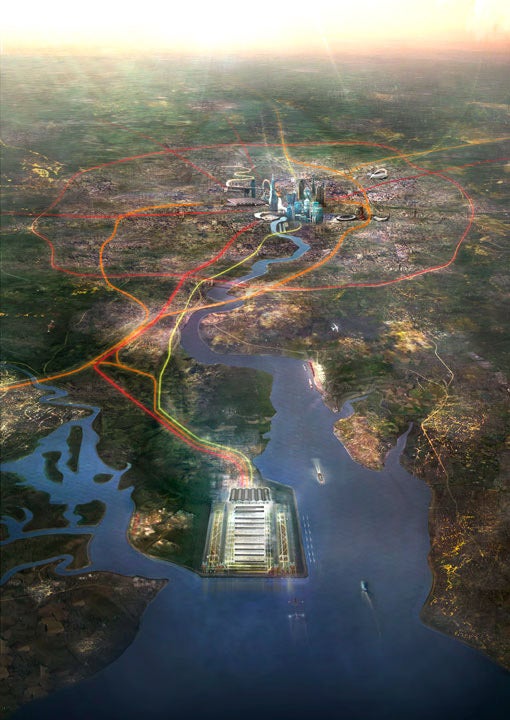 Architect rvials Foster + Partners and Make have submitted proposals to the UK Airport Commission in the midst of the ongoing debate over the country’s future aviation strategy.

Led by the Sir Howard Davies, the commission has been appointed by the UK Government to suggest plans for the expansion of airport capacity in the country.

The commision will issue an interim report by late 2013, while a final report is expected in 2015.

Foster + Partners’ proposal for a new £50bn hub airport in the Thames Estuary includes a four-runway airport on the Isle of Grain in Kent with a capacity to serve 150 million passengers a year, while also allowing the expansion to a six-runway airport.

The airport would also be linked to London, connecting directly to the current high-speed rail line, setting up a fast route from the airport to the Midlands and North through HS2.

UK-based architect Make has proposed a new fourth runway at London’s Stansted Airport, which would involve an investment of £18bn.

"Our multi-disciplinary team has undertaken detailed studies, along with widespread stakeholder consultation, to confirm that Stansted could viably be expanded to cater for the anticipated rise in air travel and meet the UKs economic, environmental and social needs and maintain the UKs global hub status," said Make founder Ken Shuttleworth.

"This is a crucial decision for Britain and one that will affect the economic competitiveness of the nation for the next century."

Make’s proposal also covers the enhancement of the existing national infrastructure, such as the West Anglia Main Line, as well as extending Crossrail 1 and Crossrail 2.

Foster + Partners founder and chairman Lord Foster said that the infrastructure of a nation can never be taken for granted.

"Only for so long can we trade on an inheritance from the past. Heathrow, with its military origins, is a case in point," Foster said.

"UK-based architect Make has proposed a new fourth runway at London’s Stansted Airport, which would involve an investment of £18bn."

"There is a limit to how much it can be patched up and enlarged, even for the needs of today, let alone tomorrow, and would you ever choose a location which dictates flight paths over the heart of London?"

Mayor of London Boris Johnson previously suggested a new four-runway hub airport in the east or north of London as an alternative to Heathrow airport.

Johnson has also suggested that the UK Government should acquire Heathrow Airport for £15bn and transform it into a housing and commercial scheme.

According to Boris, a four-runway hub airport would enable London to reach emerging global markets, while also quadrupling destinations currently being served by London in China and South America.

Amidst several ideas for its replacement, London Heathrow has also proposed three options for a new runway, claiming each of them will be ‘quicker and cheaper’ to build than a rival hub airport.