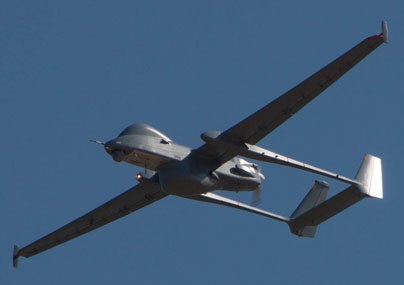 An ESA-EDA led project has successfully demonstrated the integration of remotely piloted aircraft systems (RPASs) into the European civil airspace at San Javier Air Base in Murcia, Spain.

The trials are being conducted as part of the DeSIRE (Demonstration of Satellites enabling the insertion of RPAS in Europe) project, which is funded jointly by European Space Agency (ESA) and the European Defence Agency (EDA).

Under DeSIRE, a series of test flights were conducted to demonstrate the role of satellite communications for integration into civil and military airspace.

The test measured the benefits of satellite communication, in beyond line of sight (BLOS) conditions, to send real-time high-quality data to the ground control station.

As part of the trial, a remotely piloted aircraft (RPA) took off from the San Javier runway and completed a six-hour flight in civil and military airspace.

The aircraft also reached 20,000ft and entered Spanish Air Navigation Service Provider AENA’s airspace class C, controlled from Barcelona Control Centre, while the pilot of the aircraft received the communications from the centre.

During the trial, another manned aircraft from the Spanish Air Force Academy approached the unmanned aircraft, simulating frontal and 90º collision trajectories to demonstrate the safe separation of two aircrafts on a collision course.

"A series of test flights were conducted to demonstrate the role of satellite communications for integration into civil and military airspace."

The pilot at the ground control station was provided with the data of SACTA, AENA’s air traffic control system gathered through secondary radars, enabling the pilot to have enhanced situational awareness of nearby aircrafts.

Radar fitted on the RPA on the other hand was used to detect surrounding traffic and transmit the data to the pilot through the satellite link.

The project was led by Indra (Spain) alongside AT-One (Germany and the Netherlands), SES ASTRA (Luxembourg), Thales Alenia Space (Italy and France) and CIRA (Italy).

The overall data collected during the trials will be evaluated and compared with the European Aviation Safety Agency’s (EASA) safety requirements, as well as the operational requirements being established by EUROCONTROL.

Currently, European legislation does not allow flying RPAS in civil airspace, Beyond Line of Sight (BLOS), while DeSIRE aims to set up an agreed norm that would serve as a base for the future definition of the regulatory framework for RPAS Air Traffic Integration.