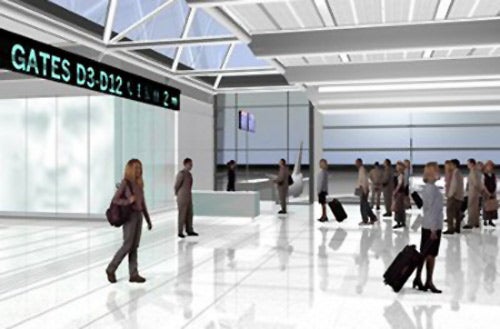 Deployed by the Irish Naturalisation and Immigration Service (INIS) and the Dublin Airport Authority (DAA) to explore both passenger acceptance, as well as the efficiency of the gates, SITA‘s iBorders biometric gates accurately detect each passenger through facial recognition.

Currently processing around 1,000 passengers per day in 7.5 seconds each, the system biometrically captures a passenger’s face and verifies it with their passport, and against border authority checklists.

The NeoFace face recognition software, being the core element in the solution, aims to offer high accuracy and selectivity, despite the size of the database and image quality.

"The NeoFace face recognition software, being the core element in the solution, aims to offer high accuracy and selectivity, despite the size of the database and image quality."

"Immigration control processes are being reviewed and leading-edge border technology such as automated gates is being tested," Shatter said.

"Many major European airports are adopting a similar trend towards the deployment of automated gates for immigration control functions to enhance passengers’ experience on arrival at airports while also strengthening border security.

The trial, which will last until October 2013, forms part of EU member states’ implementation of recommendations to shift to self-service border control by means of ABC gates.