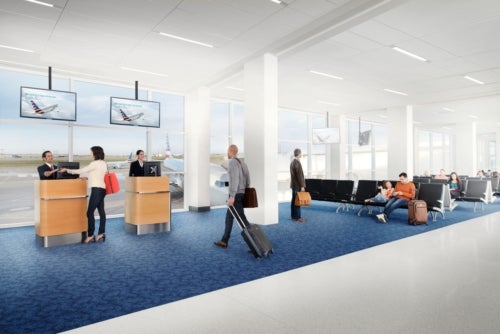 Dallas/Fort Worth (DFW) International Airport in the US has opened the initial portion of revamped Terminal A.

The project is part of a seven-year, $2.3bn Terminal Renewal and Improvement Project (TRIP) aimed at modernising the airport's four original terminals.

Features of the revamped portion of the terminal, which comprises gates A8 through A16, include new and improved facilities for parking, ticketing, security and concessions.

The self-serve ticket kiosk numbers have been increased to 11 on airside and 13 on landside, while four new high-capacity elevators have been added for transit between concourse levels.

Upon the completion of the project, American Airlines also revealed its new designs for airports featuring improved check-in and ticketing, and revamped services for premium passengers.

The airport has also opened its new 3 million square feet and five level Parking structure at Terminal A, which features improved terminal entries including covered walkways, as well as an electronic parking guidance system to assist passengers in finding available parking space.

As part of the ongoing project, the airport is replacing all of the terminal's building systems, including electrical, plumbing, heating and air conditioning, communications and lifesaving systems.

In addition, the airport unveiled 18 new concessions outlets located between the terminal's Gates A12 and A17.

DFW airport is planning to complete all three phases of work on Terminal A and the Terminal A Parking facility by late 2014, while the overall TRIP project to modernise Terminals A, B, C and E is scheduled to be completed in 2017.