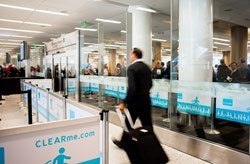 CLEAR, a provider of biometric identity airport services, has launched its platform at Mineta San Jose International Airport (SJC) in California, US, to enhance the overall passenger experience.

Located at both terminals, CLEARlanes allow passengers travelling on any airline to quickly pass through security lines in under five minutes.

CLEAR CEO Caryn Seidman-Becker said that the company is thrilled to bring CLEAR's biometric platform to Silicon Valley, an area synonymous with innovation and efficiency.

"CLEARlanes allow passengers travelling on any airline to quickly pass through security lines in under five minutes."

Mineta San José International Airport Aviation director Bill Sherry said: "We were the first Bay Area airport to offer CLEAR in 2007, and now is the ideal time to resume this service as passenger traffic at Silicon Valley's airport is on the rebound due to more air service choices and an improving economy."

The service uses biometric technology to identify members and speed them through airport security, delivering certainty of speed and the highest level of service to members at the airport, while enhancing airport security.

CLEAR operates at San Francisco, San Jose, Denver, Dallas-Fort Worth, Orlando airports, San Antonio Airport, and Westchester County Airport in New York, with plans to be operational in nine other major airports by the end of 2013.