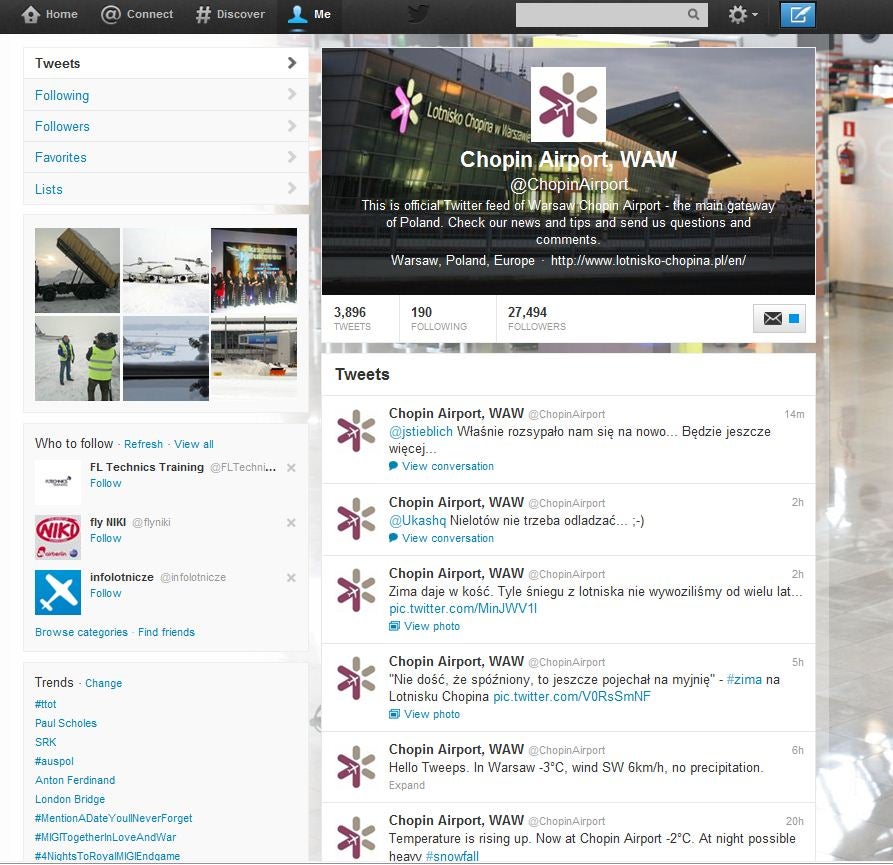 Poland's Chopin Airport has become one of the most active airports in the world on social media, with its Facebook and Twitter pages listed in the top ten airport social media profiles.

Chopin Airport's Twitter account is the fifth most popular airport profile globally, with other popular airports including Heathrow, Gatwick, Manchester and Dublin.

The airport's Twitter follower number reached more than 27,000 by the end of 2012 from an initial 2,000 followers listed during the beginning of the year.

Chopin Airport PR Bureau social media specialist Sylwester Puczen said that internet users appreciate how easy it is to find the latest information about what's going on at the airport, such as delayed and cancelled flights or important events.

"We recommend the best hotels and restaurants, give advice on what to see in Warsaw and Poland and provide travelling tips," Puczen said.

Chopin Airport's two Facebook pages are also in Polish and English languages and have 22,000 and 5,500 followers respectively.

The page offers the latest news and details about the airport, in addition to general information about air travel. The daily weather forecast, which is provided every morning, and a monthly desktop calendar are the most liked by fans.

Chopin also has other media channels including YouTube, which contains airport's videos with more than 340,000 views.

The airport has also joined Google+ with 300 followers, while it has 31,000 'check-ins' on Foursquare, the country's most popular location-based social networking website.

ChopinAirport PR Bureau director Radoslaw Zuk said that all these areas of activity help the airport get people to understand day-to-day operation a little better and boost its image.

"This is the purpose of public relations, to continuously and proactively keep in touch with the public at the place and time most convenient for them," Zuk said.

30 Nov 2020
Registration is disabled.
We use cookies to ensure that we give you the best experience on our website. If you continue to use this site we will assume that you are happy with it.ContinueLearn more
Recommended article