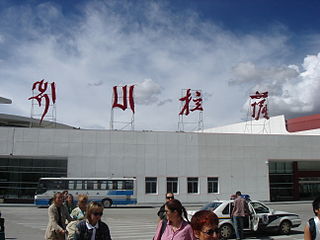 China is planning to construct a new airport at Dawu Township, which is administered by the Golog Tibetan Autonomous Prefectural Government, in the Qinghai Province.

China’s Cabinet recently approved the project, which is set to improve infrastructure in the Himalayan region, with construction expected to begin later this year completion in August 2016.

Golog, which covers 76,000km² on the Qinghai-Tibetan Plateau and is mostly made up of snowy mountains, has a population of 180,000.

"The airport will involve an investment of $184m."

The 4,411m-high Daocheng Yading Airport will surpass Bangda Airport in Tibet and become one of the world’s highest altitude civilian airports.

The current and existing infrastructure developments in the Tibet area have raised concerns in India as it provides a huge advantage to China to mobilise its troops and equipment.

Image: The airport in the Dawu Township will be the seventh in the Tibet area. Photo: courtesy of David Wong.