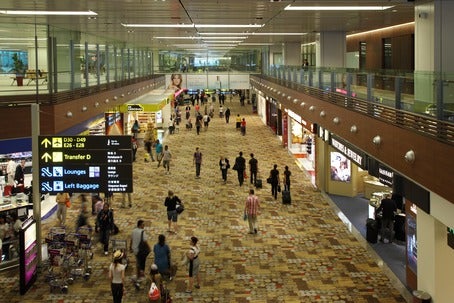 Singapore Changi Airport has reported an 11.6% rise in its passenger traffic to 25 million during the first half (H1) of 2012, compared to the 22.4 million passengers recorded during H1 2011.

The increase in passenger traffic was mainly due to a 22% rise in travel demand from the Middle East, a 15% increase in South Asia and a 14% clib in Northeast Asia since the beginning of 2012.

The strongest growth in passenger traffic was recorded on the routes to Guangzhou, New Delhi, Beijing, Frankfurt and Taipei, which each recorded at least 250,000 passengers during H1, with routes to China and India enjoying the strongest traffic increase among national markets, registering at least a million passengers.

The Singapore Changi Airport's passenger traffic in June 2012 rose 9.7% to 4.4 million passengers when compared to the 4.01 million handled during the same month in 2011.

Changi Airport Group (CAG), the operator of Changi Airport, is planning to build a new budget terminal, Terminal 4, which will have the capacity to handle 16 million passengers.