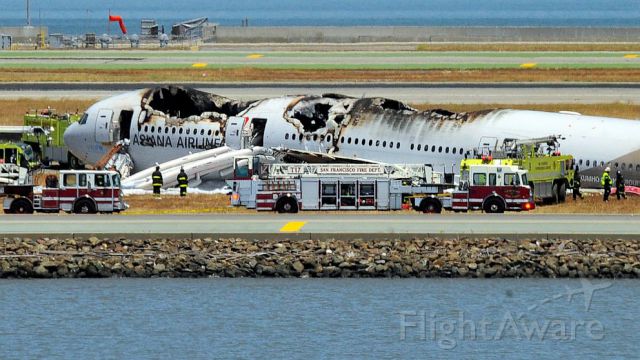 A Boeing 777 aircraft from South Korea’s Asiana Airlines holding 307 passengers crash-landed at San Francisco International Airport in the US, killing two passengers and injuring around 180 others.

The crash occurred when the crew members tried to abort the landing just seconds before it hit the seawall on the landing approach.

The aircraft then bounced off the airport tarmac and broke its tail, bursting into flames.

Other reports claimed that a navigation system, the Glide Path, which helps pilots to make safe landing, was turned off for maintenance leading to the crash.

US Federal Bureau of Investigation however said that it was too early to know the cause of the crash, which is still being investigated.

According to the airport, the system was turned-off for nearly the entire summer on the Runway 28L while the airport’s main landing strip is being revamped in a bid to give pilot’s more breathing space from the bay.

The US National Transportation Safety Board (NTSB) confirmed that pilots of Asiana Airlines flight 214 flew slower than the target approach speed and tried to initiate a ‘go-around’ 1.5 sec prior to the crash.

NTSB chairwoman Deborah Hersman said that the data gathered from the aircraft’s cockpit voice recorder and flight data recorder signified that there were no signs of trouble until seven seconds before crash, when the crew tried to speed up.

"The crash occurred when the crew members tried to abort the landing just seconds before it hit the seawall on the landing approach."

"The throttle was set at idle as the plane approached the airport and the engines appeared to respond normally when the crew tried to gain speed in the seconds before the crash."

"There has been a lot of discussion about stabilised approaches and we’re going to be looking at that very closely."

Reports also reveal that the pilot of the crashed plane was still ‘in training’ for the Boeing 777 when he tried to land the aircraft under supervision.

Asiana Airlines president and CEO Yoon Young-doo said that the crash did not happen due to mechanical fault of 777-200ER or the Pratt & Whitney PW4090 engines powering the plane.