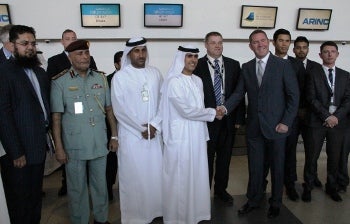 Arinc’s multiple airport systems have gone live at UAE’s Ras Al Khaimah (RAK) International Airport after the passenger processing services provider completed the implementation of systems as part of a deal signed in 2012.

The ten-year contract included the installation of a variety of airport systems, including Arinc’s core suite of airport passenger processing systems.

AirVue FIDS allows for the delivery of real-time flight information to passengers together with multimedia content such as promotional videos and live TV streaming, while the AirDB 7 supports the airport plan, tracks operational data and improves automation of data feeds to key operational teams in the airport.

"The ten-year contract included the installation of a variety of airport systems, including Arinc’s core suite of airport passenger processing systems."

"We are confident that the ARINC systems which have gone live today will make us a hi-tech, efficient and integrated airport," Qassimi said.

Under the contract, Arinc has provided a platform that uses virtualisation technology to enable RAK Airport to grow its passenger processing capacity, and introduced more advanced technologies such as Arinc’s remote check-in and bag drop system.

Arinc has also provided the airport with the region’s first off-site hotel check-in and bag drop that is scheduled for operation in the coming few months.

Arinc regional director Tony Lynch said that these technologies will enable RAK Airport to achieve its goal of being a fully automated, integrated airport with previously manual processes such as generating invoices and charge notes to customers already implemented out of the box.

"All of these systems, and more, are hosted in a fully virtualised environment, which provides RAK Airport with the ability to easily expand in the future without the need to invest in more hardware," Lynch added.