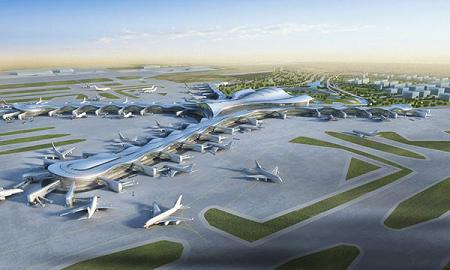 A new AED10.8bn ($2.9bn) terminal at Abu Dhabi International Airport is set to be operational on 17 July 2017, according to Abu Dhabi Airports executive Tony Douglas.

The 700,000m² terminal will boost the airport’s capacity from the current 15 million passengers per year to 30 million.

The Midfield Terminal Building, location between the airport’s two runways, will become a gateway to Abu Dhabi and contribute to the long-term success of the aviation sector in the Emirate of Abu Dhabi.

Abu Dhabi Airports has placed the first buttress for the main structural steel arches of the terminal, seven days ahead of schedule.

"The 700,000m² terminal will boost the airport’s capacity from the current 15 million passengers per year to 30 million."

Abu Dhabi Airports chairman Ali Majed Al Mansoori said that achieving the milestone is a significant step along the path of developing world-class airport infrastructure for Abu Dhabi, and its goal of becoming a vital transportation hub for the region.

"We are truly proud of hitting this important milestone ahead of schedule as it is a clear indicator of Abu Dhabi Airports’ unwavering commitment to delivering the Midfield Terminal Building on time and on budget," Al Mansoori added.

The terminal will be used by emirate’s flag carrier Etihad Airways, which is planning to increase its fleet size from to 152 aircraft by 2020, along with its partners.

The terminal is being built by a consortium of Turkey’s TAV Insaat, Athens-based Consolidated Contractors Co and Dubai’s Arabtec, and is one of the major infrastructure projects under construction in the capital of the United Arab Emirates.

Image: The new terminal at Abu Dhabi International Airport is being built to address the increasing passenger traffic.