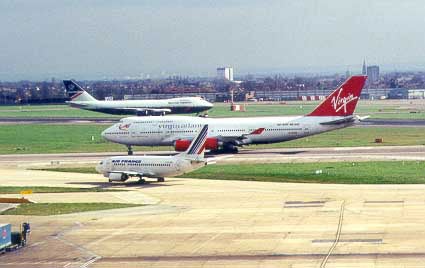 A new report by the London Assembly’s Transport Committee claims that, despite increasing air traffic, the capacity at some London airports, including Gatwick, Heathrow, Luton and Stansted, is underused and could accept more flights.

According to the report, Airport Capacity in London, some airports have around half of their runway slots free.

The report presses for proper utilisation of the existing airport capacity in London to accommodate more traffic.

According to the report, Stansted Airport has 47% of unused runway slots, while Luton has 51% and Gatwick has 12% unused slots.

Prepared by the London Assembly Transport Committee, the report suggested that Heathrow could serve 20 million more passengers by using larger aircraft, despite 99% of slots being filled.

In addition, the report suggested improvement of rail and public transport to Gatwick, Luton and Stansted to encourage passengers to switch from Heathrow.

London Assembly Transport Committee Chair Caroline Pidgeon said that the received evidence shows that the Airport Commission must examine whether better use of existing airport capacity could be an intelligent cost-effective alternative to building new airports and runways.

"The need for additional hub capacity is also under debate, with strong data showing rather than runway capacity limiting airlines ability to fly to emerging markets, it could be low passenger demand from each airport’s geographical area," Pidgeon said.

"As 700,000 residents already suffer from noise pollution as a result of Heathrow flights. We also hope that any plans to expand Heathrow can soon be laid to rest."

The report suggested that a lack of flights to emerging economies could weaken demand for these destinations.

Around 85 million of 127 million passengers through London’s airports in 2010 were drawn from East or South East England, the report said.

The report also repeated Gatwick’s recent comments about enquiring Heathrow’s hub role, as 78% of London passengers flew point-to-point in 2010, and 75% of flights from Heathrow are short haul.

According to Stansted Airport, the reduction in passenger rail journey to central London from 45 minutes down to 30 minutes would allow it to serve an additional 1.5 million passengers per year.

"The challenge for the government and decision-makers is to find the best way to support the UK’s economy globally while ensuring Londoners are not adversely affected by worsening noise and air pollution from planes flying over the capital.

"Stansted Airport has 47% of unused runway slots, while Luton has 51% and Gatwick has 12% unused slots."

"In the short-term, using existing capacity in a smarter way may be the most cost-effective solution."

The report also revealed that postcode preferences by local passengers were responsible for fewer flights to emerging economies rather than runway constraints at Heathrow and other airports.

The Transport Committee also advises the Airport Commission to consider local demand for airports in its valuation of the different options for dealing with airport capacity, including the mayor’s proposal for a new hub airport in the Thames Estuary.

Additionally, the National Air Traffic Services’ (NATS) evidence also suggests considering other issues upon selecting a site to the east of London, including airspace implications with the potential for more flights and lower flight paths over central London region.

The Airports Commission will submit its interim report on UK’s future aviation requirements during late 2013.