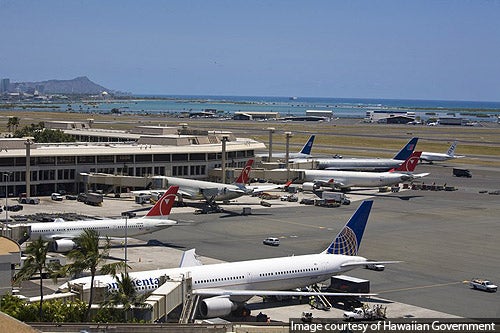 The state of Hawaii has commenced work on a four-year, $739m refurbishment and expansion project at Honolulu International Airport, as part of the state-wide Hawaii Airports Modernisation Program.

The project, which has been in the works since 2005, includes the construction of a new privately funded maintenance building for Aloha Air Cargo, consolidating cargo operations, support offices and customer service operations into a single location off Elliott Street.

The project also includes widening of runways and taxiways, in addition to a new commuter terminal, the new mauka concourse and a consolidated rental car facility.

Hawaii DOT Deputy Director for Airports Ford Fuchigami said: "The Aloha Air Cargo facility is the first step in our larger modernisation plan for the Honolulu International Airport, which will accommodate the increasing volume of air traffic and meet heightened security requirements."

"Support projects must be completed first, in order to ensure that the project is finished with minimal disruptions to the public."

Hawaii State Department of Transportation director Glenn Okimoto said that support projects must be completed first, in order to ensure that the project is finished with minimal disruptions to the public.

"For example, to make way for widened taxiways for the mauka concourse, several buildings and airplane parking areas will be demolished," Okimoto said.

The addition of six new gates brings the total number of gates to 58, while about ten more parking spaces will be provided for aircraft bringing the overall spaces to 65.

Expected to commence construction during late summer, the new commuter terminal will be located on the Diamond Head concourse of the airport.

Hawaii Governor Neil Abercrombie said: "The revitalisation of our airports is necessary and represents a historic investment to address the growing demands from visitor, resident and business travelers in a manner worthy of the Aloha State."