With on-board internet connectivity set to play a major role in what airlines offer in the skies, how can airlines maximise their own opportunities while simultaneously meeting customers’ expectations?

Currently around four billion passengers fly each year with only 25% of aircraft offering some form of on-board internet connectivity. A study by the London School of Economics (LSE) showed that airlines’ broadband-linked ancillary revenues for 2018 were at $0.9bn (part of a market of $3.8bn).

In-flight connectivity set to take off

With the International Air Transport Association (IATA) predicting that the number of air passengers will double to 8.2 billion over the next 20 years, the LSE study states that ancillary revenues are expected to reach $30bn in 2035, making the entire in-flight connectivity market worth $130bn by 2035.

“Over the next five years, connectivity will increasingly become a standard aircraft feature.”

An airline’s level of success will depend on its ability to develop shopping, suppliers and other services that passengers can purchase. If airlines play it right with broadband, the next 20 years could transform their revenue streams.

“Over the next five years, connectivity will increasingly become a standard aircraft feature,” says Nick Maynard, senior analyst at Juniper Research. “Juniper predicts that the number of connected aircraft will grow by 118% between 2018 and 2023, with over 34,000 commercial and business aircraft outfitted by 2023.”

There are two ways in which in-flight connectivity can be provided.

The first is using an Air to Ground (ATG) network, where the plane connects with the closest ground-based tower. Downsides of this system include the limited spectrum and that it only works over or close to land (flying over sea and ocean can obviously cause connectivity issues).

“The market is also being disrupted by satellite operators who are bringing new constellations of satellites into service.”

The second is through an antenna on the plane which receives data through satellites in a geostationary orbit. Air passengers connect through an on-board router.

Maynard says there are several vendors which are disrupting the in-flight Wi-Fi market.

“These include Gogo, which is offering both compelling ATG and satellite solutions,” he explains. 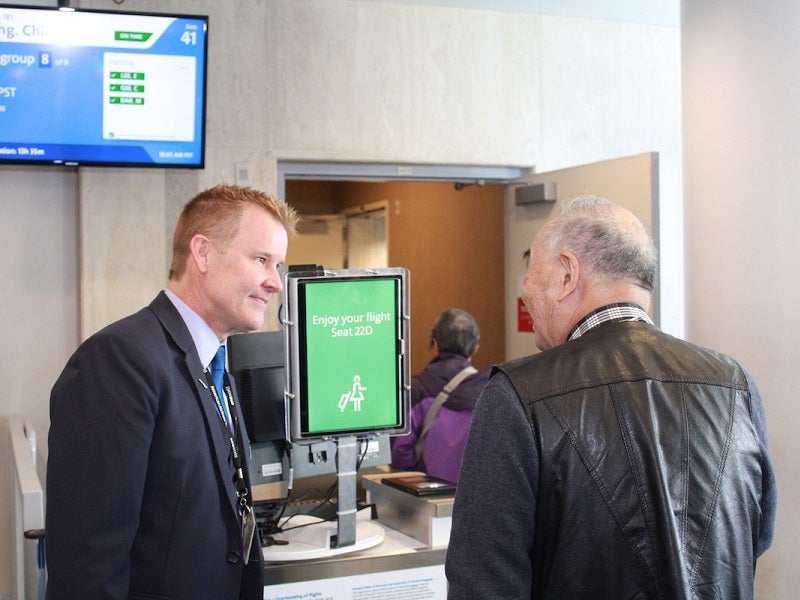 Air France has equipped some of its aircraft using Gogo’s 2Ku high-speed satellite connectivity system and the airline intends to offer Wi-Fi across its entire fleet by 2020. It offers three tiers of connectivity: messaging (free), surf, and stream (for audio and video streaming). The airline is also offering online shopping through its in-flight portal.

“[The market] is also being disrupted by satellite operators who are bringing new constellations of satellites into service,” adds Maynard. “The new availability, supported by vendors such as Panasonic Avionics and Honeywell Aerospace, is driving the feasibility of in-flight Wi-Fi services forward at a rapid rate.”

“We own and operate all of our satellites, allowing us to add or move capacity to where it is needed,” explains Kurt Weidemeyer, SVP of Aviation Technology at Inmarsat Aviation. “The network is powered by four Ka-band satellites covering the globe. These highly efficient spot beams provide a foundation layer of global coverage, designed to serve a high-speed mobile audience.”

“We own and operate all of our satellites, allowing us to add or move capacity to where it is needed.”

Weidemeyer explains that because they own and operate their satellite network, the company can not only control exactly where capacity is delivered, but also ensure connectivity on remote flight paths (other than the poles). He says that this also enables more accurate predictions for future demand.

“To ensure we continue to meet growing capacity requirements in the future, we constantly examine each of our customers’ hubs and route systems,” he explains. “For competitors that lease capacity from other network operators and resell it to airlines, making such predictions is more challenging. It’s likely that this will lead to capacity being added speculatively and not necessarily where or when their customers need it.”

Norwegian Air was the first airline to offer passengers free in-flight Wi-Fi on all European flights in 2011 (covering email, browsing and text messages). It provides in-flight connectivity through the CabinConnect™ platform by Collins Aerospace, which uses Inmarsat’s GX satellite network.

It has recently launched an upgraded Wi-Fi experience on its Boeing 737-800 aircraft as part of improving the customer experience, which offer faster speeds.

Maynard says that Norwegian offering Wi-Fi on short-haul flights is having a disruptive influence on the market because it alters customer expectations for what low-cost carriers can provide.

“Now pricing is very low, carriers have to compete in other areas,” he explains. “Norwegian has now set the expectation that Wi-Fi can be available at the lower end of the market, which puts strong pressure on its competitors to up their game. Until its competitors take similar moves, Norwegian will have a compelling differentiator.”

“Norwegian has now set the expectation that Wi-Fi can be available at the lower end of the market, which puts strong pressure on its competitors.”

While passengers can expect to see more Wi-Fi connectivity opportunities creeping onto short-haul flights, its rollout will be slower than on the larger aircraft because the economic margins are tighter.

“Despite the pressure from Norwegian, short-haul operators will be unlikely to immediately refit aircraft with Wi-Fi systems,” says Maynard. “However, as new aircraft come on line, some aircraft will be line fit with systems, as this is more cost and time efficient.”

While the US has had access to Wi-Fi for years, it is just taking off in Europe. Weidemeyer says that Inmarsat’s award-winning European Aviation Network (EAN), which he describes as “the world’s fastest in-flight connectivity service built specifically for Europe”, will launch later this year.

The popularity of streaming content sites such as Netflix and Amazon Prime is helping to drive the demand for global air connectivity.

“The popularity of streaming content sites such as Netflix and Amazon Prime is helping to drive the demand for global air connectivity.”

In the US, Netflix subscribers will increase from 82 million households in 2016 to over 114 million by 2020 and its exponential growth looks set to continue. Audio streaming is also increasing (431 billion songs streamed in the US in 2016), so it is streaming that is likely to disrupt in-flight entertainment once connectivity takes off.

With 80% passengers travelling with at least one device, LSE’s study states that some airlines will remove in-flight screens to allow for own-device streamed content. “This can also reduce fuel costs through lower weight, with almost 700kg removed for a single aircraft,” it states.

British Airways is planning to connect 118 of its long-haul aircraft over the next two years. Its high-speed bandwidth will work with Apple, Android and Windows, so passengers can connect on a variety of devices.

“We’ve seen significant growth in our aviation business over the past few years and, with the in-flight connectivity market predicted to be worth $130 billion by 2035, this growth shows no signs of letting up,” says Weidemeyer.