Despite many improvements in recent years, baggage handling continues to be one of the main challenges airports face in their pursuit of an easy, streamlined business model.

The problem is two-fold: while global passenger traffic is estimated to grow at a rate of 5.2% per year until 2029, according to Airports Council International (ACI), the most common reason for airport bottlenecks and delays are capacity issues in their baggage halls.

This doesn’t only create a stressful, frustrating experience for passengers, but it also costs airports and airlines dearly: mishandled bags cost the aviation industry $2.3 billion in 2015, despite an impressive 69.7% drop in the number of lost or damaged bags per thousand passengers since 2007.

But now, momentum is building for alternatives to the airport counter, a SITA report found in 2016, with remote baggage check-in gaining in popularity across the globe.

The latest initiative came from travel technology giant Amadeus, who in September partnered with Off Airport Check-In Solutions (OACIS) to “reinvent the check-in experience”, by enabling travellers to check-in and drop off their bags, for any airline, at a cruise terminal, hotel, train station, or a major conference or event.

By using Amadeus’ Airport Common Use Service (ACUS) cloud technology, OACIS checks-in the traveller and their luggage, securely transports their bags to the airport and introduces them into the airport baggage system. The next time their owner sees their bags is at the destination.

“Airports are constantly looking to optimise passenger processing operations, however, in the past, airlines and airports have been constrained by low innovation and legacy technology,” said Sarah Samuel, head of airport IT sales at Asia Pacific of Amadeus.

The first airline to adopt this service was Virgin Australia, which trialled it in Sydney on cruise ships and ocean liners. OACIS is planning to expand to New Zealand and other markets in the next 12 to 18 months.

Despite Amadeus’ claim to have launched the “world’s first off-airport, fully mobile check-in service”, remote baggage drop-off has been on the market in many variations for a number of years. 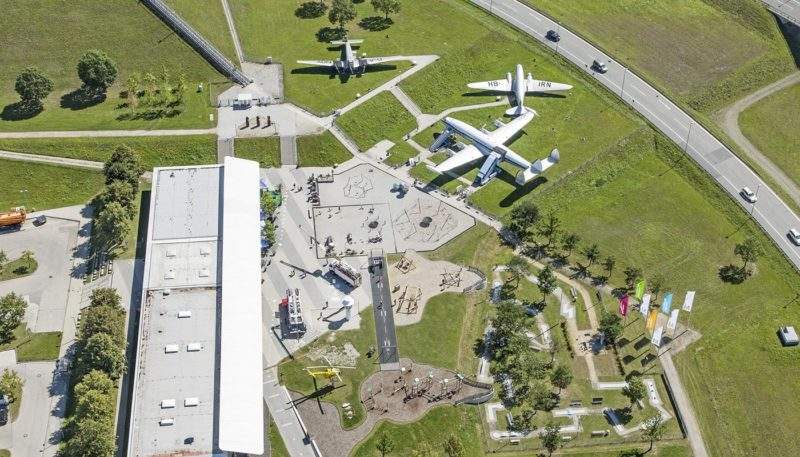 Las Vegas McCarran International airport was the first to introduce off-airport baggage drop in May 2006. Travellers can shed their bags at one of the five remote locations – three hotels, a convention centre and a car rental facility – from where staff then transport their pre-checked bags to McCarran.

Similarly, Hong Kong’s so called “in-town check-in” can be found on its metro network, where the Airport Express line offers passengers to possibility to drop off their bags at Hong Kong and Kowloon stations, and proceed to the airport bag-free.

In the UK, British Airways partnered with AirPortr app last year to bring a similar, paid service to passengers living inside the M25 and flying from Heathrow, Gatwick and London City airports. For £40 ($29), customers can check in their suitcase at home and arrange to have it picked up from an address of their choice. It will be then be transferred to the airport, where the passenger will still have to go through the traditional assisted drop-off process.

The service has also gained some ground in the United Arab Emirates, where both Abu Dhabi Airports Company and low-cost carrier Air Arabia have independently opened offsite check-in facilities in luxury hotels or shopping malls.

In Finland, a partnership between Finavia and Finnair will offer a similar service to passengers flying to Helsinki Airport from Hämeenlinna and Kittilä throughout September and October. The passengers on the selected flights will be informed about the remote check-in option by SMS, and depending on the pilot project results, the airline will decide whether this service could become permanent.

Orlando International Airport is also carrying out its own testing, ahead of a planned implementation later this year. Bag check-in points have been installed in the airport’s car parks where passengers travelling with a select array of airlines can drop them off, before picking them up again at the terminal.

One of the participating airlines, JetBlue, offers its own passengers a more extended version of the service, operating from hotels, convention centres, on-airport and off-airport parking areas, rental car areas, and on-board cruise ships in a number of cities.

The future of air travel is changing

The service has a bright future, according to research. The Passenger IT Trend Survey 2015 found that one in five Americans used an off-airport baggage drop, while SITA’s report found that passengers in China are also “keen to embrace off-airport check-in using their personal technology”.

At present, bag tracking innovations take the centre stage, ahead of the June 2018 deadline for IATA’s Resolution 753, which will require airlines be able to track a bag onto the aircraft, into arrivals or transfer areas and share this information with the next handling agent in the journey.

Once this becomes mainstream, all signs seem to point that passengers’ desire for convenience and airports’ need for extra capacity could eventually do away with the standard, assisted bag drop-off desks – and instead bring that service to your door.