Airports Getting Ready for the ‘Connected Traveller’ 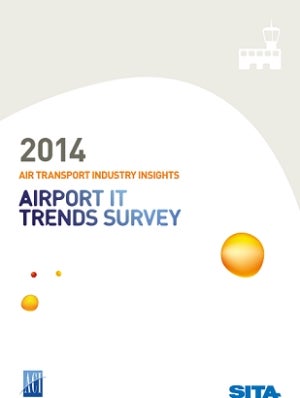 Improving passenger processes at the airport is the number one information technology (IT) investment priority of airports around the world and 47% rank passenger and airport security as their top priority, according to the 2014 SITA / ACI Airport IT Trends Survey released today.

This annual survey of the world’s airports shows the focus on the ‘connected traveller’ with investments in IT infrastructure and services that give passengers more convenience, control and a connected experience. Self-service and mobile options are key areas of investment with more than 80% of airports planning a project in these areas over the next three years.

The good news for passengers is that airports also have more money to invest in IT: 63% of CIOs expect to spend more on technology in absolute terms in 2014 compared with last year, and their total spend is estimated to reach US$6.8bn.

SITA CEO Francesco Violante said: "This is the age of the connected traveller with nearly all passengers carrying mobiles, tablets and other devices.

"It is vital that airports invest in the infrastructure to support the changing expectations of these passengers. This year’s survey shows that the majority of airports globally are investing more in new technologies and mobile services for passengers in an effort to improve passenger processes and satisfaction."

According to the survey, airports continue to invest in self-service to help manage growing passenger numbers. Over the next three years, more multi-service kiosks, self-bag drop and self-boarding services will be at airports around the world as 86% of airports plan investments in this area. By 2017, nearly three-quarters of airports expect the majority of their passengers to use self-service check-in. Common-use kiosks continue to be popular, with 60% of airports planning to increase their numbers for check-in and other uses.

"It is vital that airports invest in the infrastructure to support the changing expectations of these passengers."

Geo-location technology, which allows an airport to provide services in relation to where the passenger or staff is at a particular time, is one of the initiatives popular with airports; 60% plan geo-location programmes over the next three years. Newer innovations have caught the eye of some airports too with 49% investing in near-field communications (NFC), 33% planning iBeacon programmes and 16% investigating wearable technologies during the same period. But it is the airports in Europe that are embracing these innovations the most. By 2017, 76% of them plan programmes with geo-location, 55% with NFC and 23% with iBeacons.

Mobile investments continue to be a major part of airport IT strategies with 84% investing in mobile applications for passenger services over the next three years. The most common mobile service currently available is flight status notifications, with 50% of airports offering it now and 90% planning to offer it within the next three years. Mobile is going to take hold in other areas too. By 2017, the vast majority of airports plan to expand services through mobile apps including customer relationship management (CRM) (78%), way-finding (72%), security wait time notifications (73%) and retail services (65%).

For the connected traveller, airports will increasingly offer CRM via social media. A total of 30% already do so, but this is set to jump to 70% over the next three years. Overall, the performance in social media for airports is mixed. Of those airports that measure social media usage, 13% have found that it has exceeded their expectations while nearly 18% report passenger usage figures lower than expected.

The 11th edition of the SITA Airport IT Trends Survey is based on responses from participants at airports across the world, through which 2.35 billion passengers travelled last year. This represents 42% of the total global passenger traffic and 46% of the traffic among the world’s Top 100 airports.

*The report was launched today at the ACI-Airport Exchange event in Paris. Further details on the survey and customised data from all of SITA’s industry surveys can be accessed here.

The Airline IT Trends Survey, co-sponsored by Airline Business and SITA, shows a continued, though modest, upward trend in the level of absolute IT investment...

Passenger numbers are growing strongly and 97% of them are carrying mobile devices to stay connected and keep them informed and entertained throughout their trip....

If the hype is to be believed, the customer service experience is about to undergo a fundamental change. Beacons emitting a Bluetooth signal are starting...

This nineth passenger survey, co-sponsored by Air Transport World and SITA, highlights the major role and positive impact that IT is having on many passengers'...