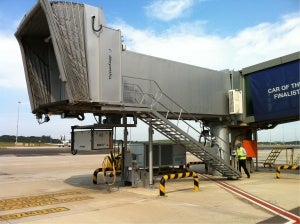 Vice president of international sales and marketing at AXA Power, Mr. Paul Elvstroem, has proudly announced that 2011 was an all-time high year for AXA Power, commenting, "We had very good sales both with regard to our well-known 400Hz business, but certainly also with regard to our latest product launch: the AXA Power pre-conditioned air (PCA) unit."

More than 100 pre-conditioned air units were delivered to major projects in Russia, Turkey, Qatar and Italy, and presently several contracts for delivery throughout 2012 and 2013 are under negotiation with some of the largest airports in the world.

During 2011 AXA Power established its leading position within the 400Hz business, with framework agreements with SAS and Avinor (Norwegian Airport Authorities). The company also experienced good sales in other European markets, including Germany, Czech Republic and Italy, as well as delivering to several AENA airports such as Palma, Mallorca, Valencia, Ibiza and Vigo. As in previous years, Russia was also a big market. The biggest project however was in the Middle East, with delivery of another 80 pcs of ground power units to Dubai.

Better international customer serviceAs a consequence of the growth and success of the past years, AXA Power has chosen to strengthen its sales organisation on the international markets. At the beginning of 2011, AXA opened a sales office in Dubai lead by Mr. Xavier Charrondière. Later in the year, the ITW Group (Illinois Tool Works), to which AXA Power belongs, opened an ITW GSE office in Singapore. This office employs six GSE managers who provide project management, sales and service to the Hobart Ground Power and AXA Power’s distribution networks.

"This consolidates our position as the leading manufacturer of 400Hz solid-state ground power units and point-of-use PCA units on an international basis", Elvstroem remarked.

Future prospectsThe AXA Power PCA product programme is under continuous improvement to secure an up-to-date product range that satisfies the expectations of AXA Power’s customers and the requirements of modern aircraft. AXA Power has recently launched the AXA Power PCA 210, an excellent supplement to the PCA 130. So far, the PCA 210 has been sold to projects in Qatar, Australia and Pragu, which contributes to the bright prospects for the world’s smartest PCA.

Modular design, less downtime and bigger profitsThe PCA 210 has been designed to cool the aircraft, and has two connections providing cooled air into the aircraft cabin. Not only the ultimate solution for Europe, the PCA 210 is not only the ultimate, it also does the job in the extreme Middle-East climate and in the humid surroundings of the far east. Without any doubt, the PCA 210 is the market’s most powerful point-of-use pre-conditioned air unit. It is also very economical due to the efficient stepless compressor control at output.

Just like the PCA 130, the PCA 210 is of modular design. This hallmark of all AXA products is exactly the feature that customers tend to appreciate most when talking pre-conditioned air units, as it brings a huge difference to this particular product.

The AXA PCA is designed around identical cooling modules. In case of a fault, the faulty module can easily be slid out of its rack and replaced with a new module. This takes merely 20 minutes and there is no need to call in a technical specialist with specific knowledge of refrigeration as each module forms a closed-loop system. The closed-loop system also means that the AXA Power PCA can continue providing cooled air in spite of one inactive module.

Go green and save moneyAs of January 2012, the aviation industry joined Europe’s emission trading scheme, under which all carriers using European airspace are charged for carbon emissions. Therefore, everybody has an interest in reducing the carbon emissions to a very minimum. This is sustained by the AXA Power go green on ground philosophy.

By letting external 400Hz solid-state power units and pre-conditioned air units take over the duties of the onboard aircraft auxiliary power unit (APU) while the aircraft is parked at the gate, the airport can reduce CO2 emissions by as much as 85%. Noise is also considerably reduced.

For the airlines, the go green concept means reduced cost with respect to fuel and APU maintenance. "All together, we are talking savings of about €100,000 per year per gate," Elvstroem concludes, "and of course an overall greener environment."

ExhibitionsThere will be several occasions to have a look at AXA Power’s products, notably the PCA 210, during 2012 as AXA Power will join various exhibitions, including the Passenger Terminal Expo in Vienna, the Airport Show in Dubai and airport shows in Russian and Jeddah.

AXA Power is also soon to launch a new mobile site for people on the move.