With around 30,000 hours of flight, British Airways pilot Nick Eades is the world’s most experienced 747 captain. What most people don’t know is that Eades started his career in aviation as a self-improver, starting from the bottom because he didn’t have the money to attend a flight school.

During the first few months of the Covid-19 pandemic, Eades decided to put pen to paper and write Self-Improver, an autobiography of his life in aviation, from when he was cleaning and loading aircraft to flying U2 on their Joshua Tree Tour. 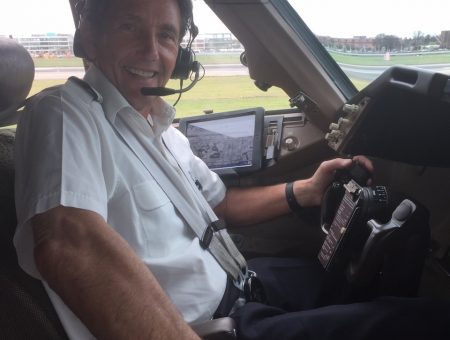 Ilaria Grasso Macola (IGM): Why and when did you decide to write the book?

Nick Eades (NE): I have to admit it’s been on my mind for a number of years but being a full-time pilot made it very difficult to get the time to write a book. When the pandemic hit last March, the airline I work for, British Airways, grounded all 747s and we were put on furlough.

Given that I had time on my hands, I thought that it was the perfect time to write the book and once I started it was difficult to stop. Overall, it was nine months, from putting it pen to paper to having it published.

It took me about five months [to write] and I was working most days, but the most difficult thing was to edit it and make sure that it flew well.

What was the rationale behind your autobiography?

The way I went into flying, you can’t do it these days, you can’t teach yourself but have to go a [flight] school. What I did can never be done again, it’s confined to the annals of history.

My career was in two stages: the first one is when I left university and gave up on any other idea of a career and dedicated myself 100% to aviation, saving up by working seven days a week for 16-hour shifts cleaning the aeroplanes, anything I could do to get the money to learn how to fly a plane.

It took a long time and a lot of work but eventually, I got it.

In 1974 you tried flying for the first time. Why didn’t you like it?

I come from an aviation family, as my father was a commercial pilot while my uncle was in the Royal Air Force (RAF) so from a very young age, my father and brother both wanted to fly. When he was old enough to get his licence, my father gave my brother some money to learn to fly but at the time I wasn’t interested as I was far more interested in buying and reselling second-hand cars.

I did a flying lesson, spending an hour flying around but when I landed, I thought that it was nice but not as a job.

What made you try again five years later?

After my first flying lesson, I went back to buying and reselling old cars, but I wasn’t sure what I wanted to do in life, so I went to university and started a degree. Once I went travelling with my father to South America, I realised that I extremely enjoyed [flying] but by that time he wasn’t going to help me, so I decided to go back to university. I was actually sitting an exam when I realised that university was of no interest to me, so I walked out and left.

As you’ve written in your memoir, you couldn’t initially afford to attend a flight school, so you became a self-improver. Why were self-improvers looked down upon by airlines?

In the aviation world, you can do one of two things. Either go into the RAF, fly for 12 years and then change to civilian aviation. If you are part of an airline’s interview board, you see someone who’s been flying for 12 years, they have a known background and they are very good prospects.

The other way into aviation is recruiting students from university, interviewing them before they learnt how to fly. Up until 1987, British Airways had not employed anybody outside of people from their own flying school or the RAF.

When I first got my licence in 1980, I applied to airlines, but they weren’t interested because although I had the licence but didn’t have the background and training they were expecting.

When I entered seven years later, [pilots like me] were known as direct-entry pilots (DEPs) and we were looked down upon. Being a DEP wasn’t a good thing but being a self-improver and a DEP meant being at the bottom of the pile.

Compared with when you began, how has the situation changed for self-improvers in aviation? Is it still possible to become one?

The government changed regulations because if in the past if you accumulated a certain number of hours then you could take the exam, but now you have to go to a flight school, which usually are quite expensive.

Five years down the road there’s going to be a shortage of pilots because my generation will have retired and younger people can’t afford it unless they come from a wealthy family.  Flying has become mostly a thing for the rich and I think it’s extremely sad.

How has aviation in general changed since you entered in the late 1970s?

One word, technology. When I started flying, we were still using very basic instruments whereas today technology has completely changed that, everything is computerised now. That is both good and bad because, on the one hand, it increases safety, on the other, it detracts some of the piloting skills that we have to learn and practice.

As a result of the retirement of the 747 Boeing fleet, you’ve become the most experienced 747 captain on the planet. How does it feel?

BA operated 747 aircraft longer than any other airline in the world and one of our junior co-pilots wanted to see if his father, also a 747 pilot, was the world’s most experienced captain of 747.

While doing his research, he found me.

Given that you have mostly flown 747s what did you think of the global decision to retire the fleet in 2020?

My heart wanted the Jumbo to go on, at least a few years more until I retired but my head thought that even though the Jumbo is a wonderful plane, it’s incredibly expensive to operate.

If I was an accountant, I would have done the same, especially with Covid-19 around you have to cut through costs as much as possible and the 747 was an expensive aeroplane to operate.

What would you say to a young person who wants to become a pilot?

It’s one of the most rewarding careers you can do, and every day is different because every time you go to work, you’re facing different challenges and problems. Even after 40 years of flying, every time I go to work, I say that you only stop learning the day you retire because there’s always something new to learn.

Being a pilot is not as glamorous as it used to be in the 1960s and 1970s but it’s still a hugely rewarding job. If you fly 400 passengers across the world, there’s probably a couple of things that you needed to do to make their journey better and safer.