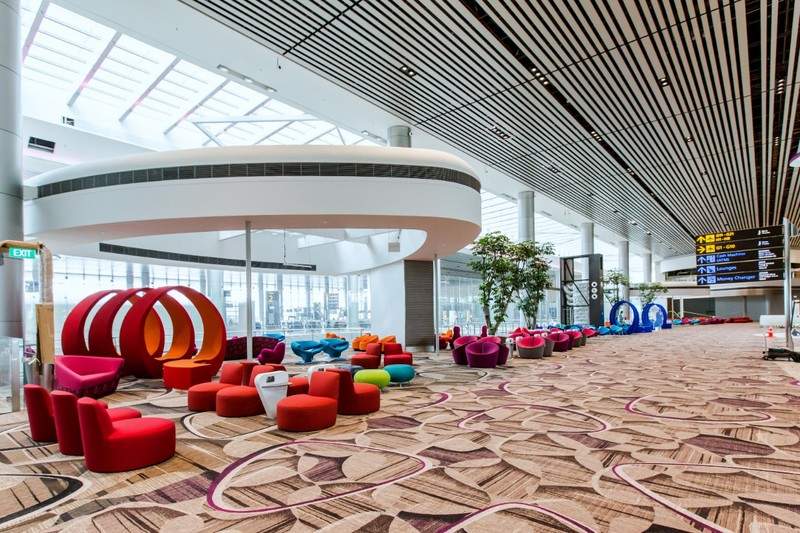 Singapore Changi Airport is one of the largest aviation hubs in Southeast Asia, serving over 100 airlines and more than 60 million passengers annually. But it’s the airport’s boundary-pushing terminals that really impress, with previous amenities including a butterfly garden, a free 24-hour cinema, and even a rooftop swimming pool.

In October last year, all eyes were on Changi for the grand opening of Terminal 4 (T4), which was built over a three-year period at a cost of S$985m. With a focus on nature and a fully automated passenger experience, it’s become a darling for the media and the Instagram-obsessed alike. We take a look at some of the terminal’s highlights. 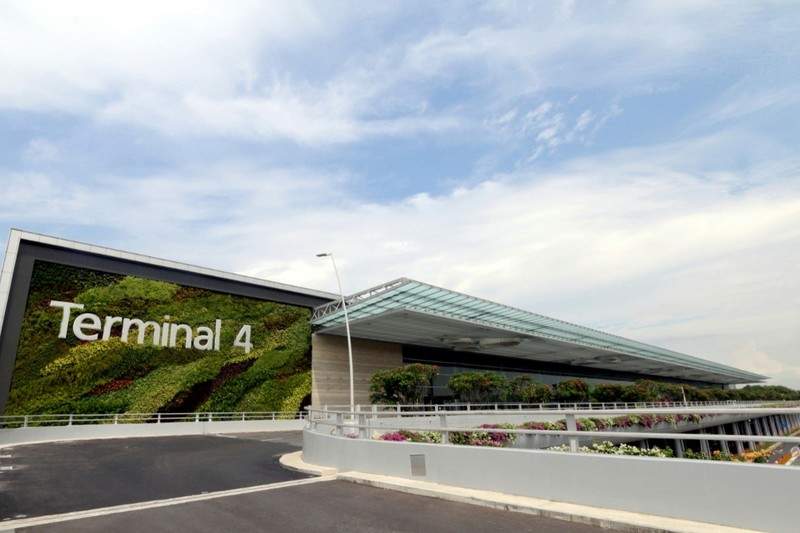 The two-storey terminal is 25m high and has a gross floor area of 225,000m2, including its car parks, taxi deck and coach stands. Although smaller than Changi’s other terminals, it still has space for an additional 16 million passengers, bringing Changi’s overall total annual passenger capacity to 82 million.

Passengers arriving at T4 are greeted by one of the terminal’s two majestic ‘green walls’, developed in conjunction with foliage-based art specialist GWS. More than 16,000 plants nestle around the white letters depicting the terminal’s name on the outer wall, creating a natural aesthetic while reducing the surrounding temperature of the terminal and improving air quality. According to Changi Airport Group (CAG), T4’s interiors are intended to provide a more compact ‘boutique’ feel compared to its larger counterparts. This is saying something, considering it still spans the length of 27 football pitches.

T4 combines immigration and pre-board security screening into one centralised area, creating more space for its bright and airy departures and arrivals halls. Check-in islands are oriented towards the immigration zone, helping passengers find their way to security and the shops beyond.

Orchids are a common motif repeated across the terminal, inspiring the designs of petal-shaped skylights in the departures hall, carpet patterns, dustbins and even fire extinguisher holders.

Getting passengers from lobby to departure gate is enhanced by T4’s new suite of fast and seamless travel (FAST) technologies. Passengers can check in and print out their boarding passes from one of the departure hall’s 65 automated check-in kiosks, before heading to one of 50 automated bag drop machines. There, a photo is taken of the passenger and matched against their passport before their bag is whisked off, sans intrusion from airport staff.

The automation doesn’t end there. At immigration, a dual facial and thumbprint biometric recognition system is used to identify registered Singaporeans and permanent residents, who only need their face to board at departure gates. And then of course, there are the cleaning robots, sucking up rubbish at a speed of 1,600m² an hour. 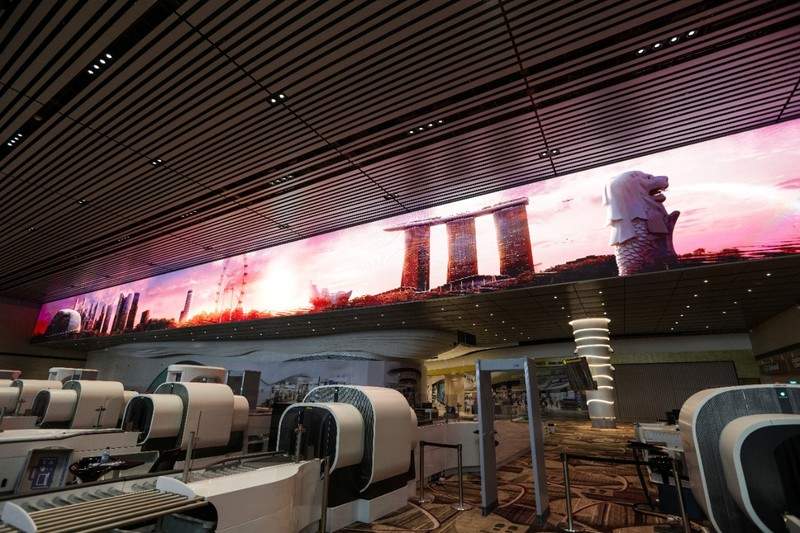 Despite T4’s array of technologies for speeding up passenger throughput, there’s still the chance of a queue at security. But it wouldn’t be Changi without a glitzy solution.

Spanning the ceiling of T4’s central departure security screening area is a 70x5m ‘Immersive Wall’. It’s a high-definition LED display showcasing a picturesque series of images depicting Singapore’s skyline and landmarks, as well as a Willy Wonka-like animation of bags being screened. The transition between each scene is deftly handled with an amazing 3D ripple effect.

Tapping out at 50 minutes, the playlist of animations is created by Moment Factory, a multimedia company based in Montreal, Canada. 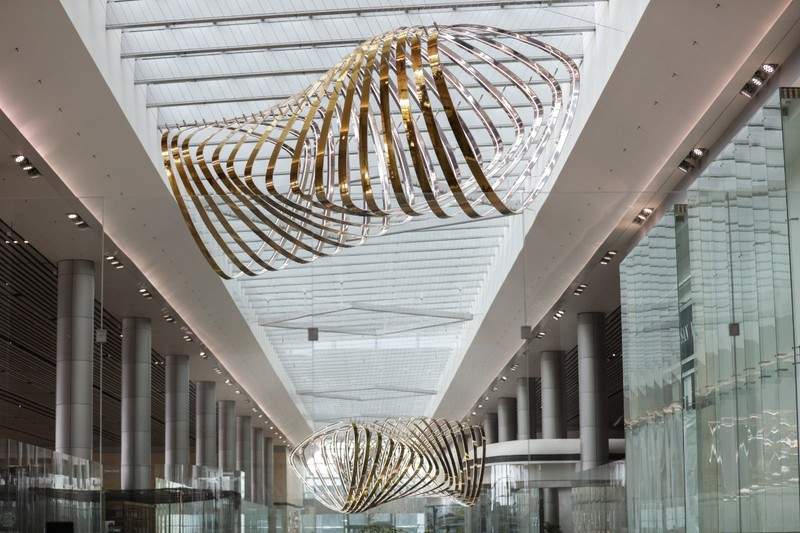 Spanning the 200m stretch linking T4’s public and transit areas, the work is designed to evoke the impression of clouds moving through the sky. Each identical ‘cloud’ consists of 16 individual petal elements suspended on wires, which slowly rotate the structures while transmitting power to lighting elements inside them. 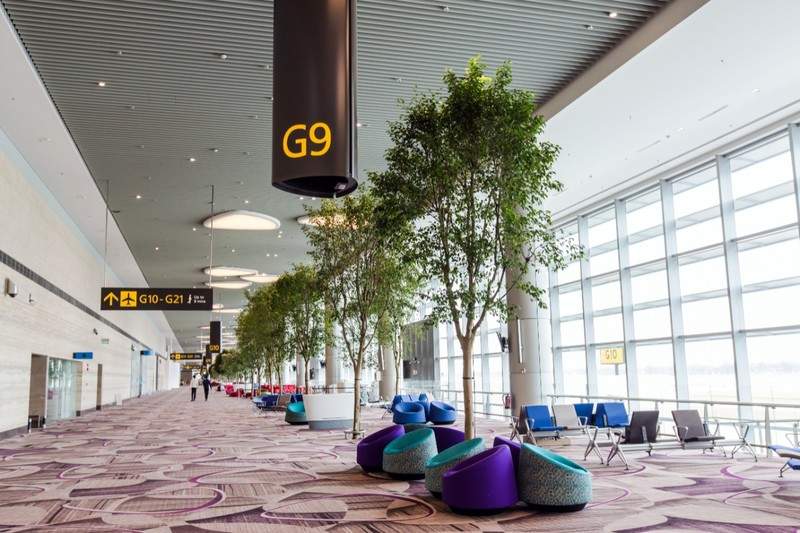 Bringing a healthy dose of green to T4 are more than 340 plant species, many of which are draped across the terminal’s indoor and outdoor facades. Of particular note is a column of 160 trees splitting the 800m boarding corridor in the departures area.

The omnipresent shrubbery alludes to Changi’s environmentally friendly pedigree, which manifests itself in numerous other ways across T4. The terminal features energy-efficient lighting and motion sensors, while windows are fitted with solar shading films to boost natural light, minimising the need for artificial lighting and air conditioning. 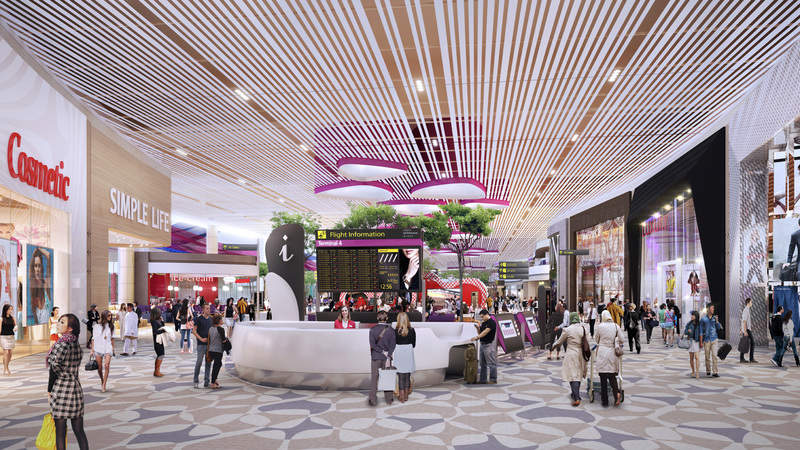 Once passengers are past security, they can weave their way through T4’s comprehensive shopping area, which features more than 80 stores and restaurants from a variety of localities.

For the first time at Changi, two separate duty-free categories are combined in one integrated zone in the terminal’s transit area, allowing customers to buy liquor, tobacco, cosmetics and perfumes in a single location. Situated along the central walkway between shops are two exhibition pods, which can house unique pop-up shops for passengers to visit.

The 1,100m² SATS PPG Blossom lounge offers a range of catering and hospitality services to passengers willing to pay a bit extra, and includes an open-air pod overlooking the transit area. Meanwhile, the slightly smaller Cathay Pacific Lounge provides a great view of aircraft landing and departing from the airport’s Runway 2, as well as a noodle bar, showers, an IT zone and relaxation rooms. 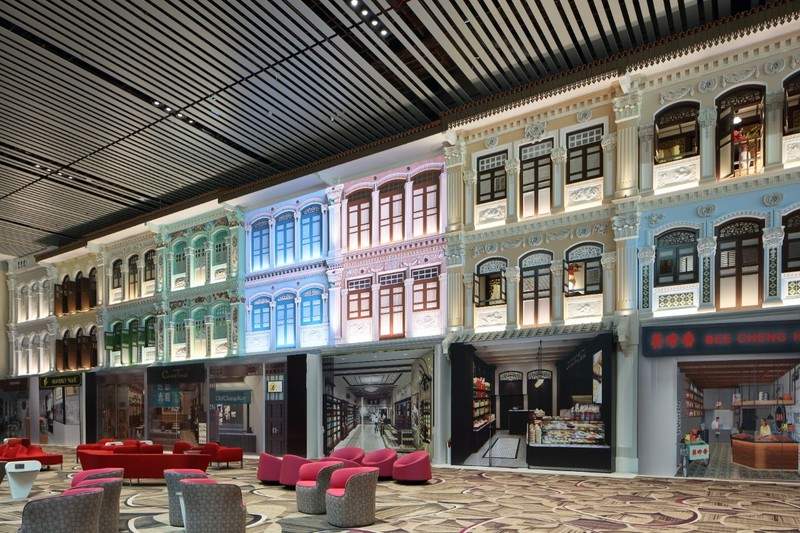 Despite its modern trappings, T4 still makes time to pay homage to the past. Located in the terminal’s transit area, the Heritage Zone features a row of boutique storefronts designed to resemble the historic Peranakan shop-houses nestled around Singapore. Each façade traces the evolution of shop-house architecture, starting with the baroque designs from 1880 to 1900, through to the post-war décor of the 1950s.

An LED screen embedded in the façade brings it to life with regular showings of Peranakan Love Story, a cultural theatre piece featuring an array of virtual characters that appear to mill about in the shop-houses’ windows and living rooms.