Speaking in late July, the EU High Representative for Foreign Affairs and Security Policy, Josep Borrell, announced a further tightening of sanctions the bloc had imposed on Russia in response to its invasion and ongoing war in Ukraine.

As part of the enhancement, the EU said that changes would be made to sanctions already placed on Russia’s aviation industry.

However, the intention was largely to sure up safety and security – rather than further impede the sector – in response to growing concerns that Russia would flout or at best be unable to adhere to safety standards as sanctions begin to bite. This was the latest chapter of a series of sanctions against Russia since the initial invasion of Ukraine in February.

Preluded by months of military build-up on Ukraine’s borders, just before 6am Moscow time, Russian President Vladimir Putin told his country, and the world, that Russian forces had embarked upon a “military operation” in the east of Ukraine. Putin said that the operation was an attempt to demilitarise and “de-Nazify” Ukraine as an act of self-defence.

Analysis
Flightpath to the Future: a new plan for UK aviation 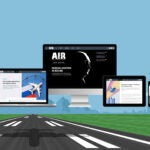 The news was roundly criticised by much of the world, eliciting almost immediate responses from the US, where President Joe Biden branded the act as “premeditated” and one that would result in “catastrophic loss of life and human suffering”. UK Prime Minister Boris Johnson said the “hideous and barbaric venture must end in failure”, and European Commission President Ursula von der Leyen said the bloc would impose a “massive and targeted” raft of sanctions in response.

The UK announced it was banning Russia’s flag carrier, Aeroflot, from its airspace, a move replicated by Bulgaria, the Czech Republic, Estonia, Latvia, Lithuania, Poland, and Romania within hours. The US Federal Aviation Administration said it was stopping US aviation interests from using Belarussian, Ukrainian, and parts of western Russian airspace. The ban covered passenger and cargo flights.

Iceland imposed a complete ban on Russian flights into its airspace. Austria, Belgium, Denmark, Finland, France, Italy, Slovenia, and Sweden were among others saying they were taking steps to close airspace to Russia that weekend.

Lithuania’s measure became active on Saturday (26 February) evening, as the country’s Prime Minister, Ingrida Simonyte, said: “No flights for aggressor planes in democratic skies”. The move would have a significant impact on Russia and its people, given that the route is the most direct for those travelling between the mainland and the Russian exclave of Kaliningrad – nestled between NATO members Lithuania and Poland – with its population of almost half a million.

Norway’s Prime Minister Jonas Gahr Støre said: “The EU is imposing tougher economic sanctions in a number of areas. We are therefore in close contact with the EU and our neighbouring countries, and preparations for implementing the wide-ranging package of sanctions are in full swing.” Those measures included closing Norwegian airspace to all Russian aircraft.

Within hours, the EU announced a complete ban on Russian flights from its airspace, meaning planes cannot land, take off, or pass through the entire bloc. “We are shutting down EU airspace for Russian-owned, Russian-registered or Russian-controlled aircraft,” von der Leyen said.

Canada reacted to the invasion with a similar move, prohibiting all Russian aircraft from its airspace, while US officials had been making similar overtones. By the end of the weekend, airspace bans were beginning to be felt at Russia’s airports; departure and arrival boards were largely displaying a red hue as flights in and out of the country had been affected.

As part of the raft of EU sanctions, another that affected aviation was the banning of all goods and technology linked to aircraft being given to Russia. The move led to an almost instantaneous response from the lucrative aircraft leasing industry, which does significant business with Russian airlines. It also left them with a major problem: how to get back its hundreds of jets on the ground in Russia at the time?

Russia had been reacting angrily to the feed of news, first with its airlines announcing they were cancelling flights and self-imposing restrictions, then officially by banning air traffic from a growing list of countries. What began with a ban from its airspace to UK-linked planes quickly became a total ban on anything coming from or passing through Bulgaria, the Czech Republic, Estonia, Latvia, Lithuania, Poland, and Slovenia.

Russia formally announced it was banning flights from 36 countries. The news was no surprise, given Russia’s previous statements over the weekend. Impacts were beginning to be felt at the very top of Russian Government, with a handful of diplomatic missions falling victim.

The same day, Switzerland, often passive on matters of this nature, took the unusual step to join with its European neighbours in excluding Russia from its airspace.

US authorities announce they are stopping Russian flights from using US airspace. Stating the ban was effective as of that evening, Pete Buttigieg, US transport secretary, said: “The US stands with our allies and partners across the world in responding to Putin’s unprovoked aggression against the people of Ukraine.”

Russia bans flights to some southern parts of the country – a move first seen as temporary but which has continued that has a dramatic impact on domestic travel. It ultimately resulted in the closure of 11 airports, including the Black Sea resorts of Anapa and Gelendzhik.

Putin holds a special meeting at which he says the aviation industry would receive financial support in the face of “consequences of inadequate decisions by the Western countries” that were impacting the sector. “The truth is, they have cheated their Russian partners by terminating deliveries, leasing, services, and insurance for airplanes,” he told attendees. “Nevertheless, Russia is not going to close its doors to the outside world.”

Despite the numerous airspace bans and counter actions by Russia, flights between Europe and Asia increased, adding 7% more airline seat capacity. The data, supplied by aviation information and statistics provider OAG, showed the increase was in comparison with flights in the immediate aftermath of the invasion.

A Russian official suggests help is coming to the beleaguered aviation sector. Speaking with TV station Rossiya 24, Minister for Economic Development Maxim Reshetnikov said the sector could expect to be subsidised.

Russian State-run news agency TASS had previously said Putin had earmarked almost $310m for airlines to help cover airline expenses from February to July. It said: “Due to the global Covid-19 pandemic, Russia has closed international flights that are highly profitable for companies (except for repatriation flights)”.

According to state media, Putin signs a law allowing Russian airlines to keep and operate planes – on domestic routes – leased from international suppliers. The news wasn’t a complete surprise, as officials had suggested such actions could be taken days before the official statement. The government had already told aircraft operators to not fly these aircraft to international destinations, likely in a bid to prevent them from being seized.

However, industry watchers warned that flying foreign planes could have potentially dangerous consequences as the country remains cut off from sourcing parts or maintenance services, raising the risk that flights will be carried out by planes in need of servicing.

The announcement did, say some, show the impact sanctions were having on Russia’s aviation industry. According to TASS the law was an attempt to preserve the foreign aircraft fleet within Russia to keep civil aviation operations going it said, citing official documents it had seen.

Speaking of the news, Domhnal Slattery, CEO of aircraft-leasing company Avolon, which had 10 aircraft in Russia at the time of his comments, said: “It’s just robbery. They’ve stolen the aeroplanes. It’s incomprehensible.”

The UK Government announced further sanctions aimed at Russia’s aviation industry. In response to concerns carriers were cashing in on their now unused landing slots, it banned state-owned Aeroflot, Ural Airlines, and Rossiya Airlines from selling them, preventing Russia from cashing in on an estimated £50m.

At the time of publication, it is unclear how many aircraft remain in Russia. Some estimates put this figure at 400, with a total value of £8.25bn.

As sanctions hurt Russia’s aviation sector, the Kremlin announced plans to invest $14.5bn by 2030 to increase the share of domestically-manufactured aircraft.

Announcing the plan, which the government said would see as many as 1,000 new Russian manufactured commercial aircraft enter service by the end of the decade, Deputy Prime Minister Yury Borisov told a gathering of officials and media: “The share of domestically produced aircraft in the fleet of Russian airlines should grow to 81% by 2030.”

For some time the country’s media outlets – many of which are state-controlled – had been reporting on plans to ramp up domestic production, with rumours that Aeroflot was close to signing a contract with the state-owned United Aircraft Corporation for the purchase of 300 new aircraft.

There is growing concern about the safety of flights coming out of Russia, and those operating domestically. Widespread media coverage focusses more heavily on the dangers posed as a result of the inability to properly maintain aircraft, citing numerous experts.

Although unconfirmed, there are several reports of flights landing with pilots reporting mechanical issues. Some of those aircraft took to the skies again but, despite being approached, operators did not divulge how any issues may have been resolved.

As many as 19 million fewer passengers will travel by air in Russia this year says the Russia’s own Ministry of Transport. According to business publication Vedomosti, sanctions and airspace closures by the West and Moscow are to blame.