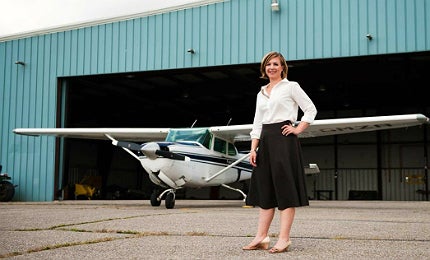 It is difficult to believe that in the 21st century, with so much emphasis on gender equality in the workplace, that women are so vastly under-represented in the aviation and aerospace sectors. While women are very visible in customer service and administrative roles – in the UK around two-thirds of ticketing and sales personnel are female – behind the closed doors of the cockpits, the hangars and the board rooms, it is a very different story.

"Figures from the Civil Aviation Authority (CAA ) show that in the UK only 3.3% of licensed air transport pilots are female."

The number of women in ‘non-traditional’ roles, such as pilots and engineers, exposes a very uneven balance of men and women in the workplace, which exists right the way up to board level. According to Women in Aviation, International, in the US 6.6% of women are pilots and just 2.2% are female mechanics and, in Canada, statistics show that just 5.2% of licensed aeroplane pilots are women.

Figures from the Civil Aviation Authority (CAA) show that in the UK only 3.3% of licensed air transport pilots are female. According to the Royal Academy of Engineering only six percent of the UK’s engineering professionals are female and a Labour Force Survey from 2004 reveals that there is an even lower proportion of women working in aerospace than engineering in general (11,% compared with 19%).

Part of today’s problem is down to the lack of visible role models, believes Clare Walker, chairman of the RAeS’s Women in Aviation and Aerospace Committee, who is also licensed to fly twin-engined aircraft. "Most young women don’t believe women do jobs such as piloting commercial aircraft, as so few are visible or audible in the cockpit," she said.

Walker believes that if young women were continually exposed to successful role models in the industry, then more young girls would believe non-traditional roles are achievable for them too.

While Danielle Metcalfe-Chenail, now a director of the Canadian Aviation Historical Society (after serving as its first female president from 2010-2011), asserts that cultural norms, such as the ‘old boys club’, take time to change, she sees Canadian media ‘normalising’ women in aviation more and more. "The more women see stories demonstrating the achievements of their predecessors told in books and through different media, the more they can envision those roles for themselves," she said.

Dr Peggy Chabrian, president of WOMEN IN AVIATION INTERNATIONAL , believes this to be the case. "If a young girl sees a woman performing a job skill or career position, she may be more inclined to consider this as something for her as well. Exposing young people, boys and girls to aviation, is key to filling the manpower needs of this industry."

A battle for information

Another problem, suggests Walker, is a lack of understanding about "key influencers" on young people’s career choices. The RAeS report discovered that "many young people have little understanding of what engineers actually do" and Walker believes that as a result familiar careers are recommended, such as medicine and teaching.

"Being able to give young women hands-on experience of flying plays a big part in inspiring young minds about their future."

Informing young girls before further education is crucial. RAeS’s report showed that in terms of STEM subjects (science, technology, engineering and mathematics) girls are on a fairly even footing with boys up to the age of 16, but make up only 11% of students in further education.

Airbus is somewhat a model example of how commercial enterprises should support female entry into the industry. Voted best employer in France for the second year running in 2012, by the Palmarès Employeurs, it already runs many activities to encourage interest in STEM subjects and also holds specific "girls into engineering" events in the UK.

It has also launched a three-month Industrial Cadets (IC ) programme that will teach 60 girls about aeronautical engineering and aviation.

These types of initiatives inform, transform and challenge existing perceptions. Sharon Glancy, founder of Women 1st, believes that this is vital: "Certain occupations – for example roles within airside operations, such as baggage handlers, aircraft despatch and aircraft maintenance engineers – are traditionally seen as male-oriented. Businesses can make these roles more appealing to women, for example, by emphasising the flexible hours on offer, which can benefit someone returning to work after having a child."

Women 1st has devised a "Step into Aviation" programme, which has been endorsed by many employers, including Servisair and Heathrow Airport Ltd. It provides specific industry information to women and will be rolled out into college programmes in the future.

Being able to give young women hands-on experience of flying plays a big part in inspiring young minds about their future in the aviation and aerospace sectors. "I believe there should be more programmes like Adopt-a-Pilot, Young Eagles, Air Academy, KidVenture, Women Soar and Girls Fly," said Michelle Bassanesi, founder of Aviation and Women in Europe (AWE ). "It is the availability, or lack, of information and visibility that makes all the difference".

In March 2013, The Women Of Aviation Worldwide Week initiative exposed more than 17,000 girls worldwide to the opportunities available and 5,300 experienced flight in a small aircraft. The organisation discovered that more than 76% of the attendees had never thought of seeking information about aviation activities before hearing about the event.

It pays to have women on board

When it comes to the lack of women at the top, Women 1st report that just 25% of management positions are held by women. But according to US-based Catalyst: "Businesses with the highest representation of women on their top management teams delivered 35.1% higher return on equity and 34% higher total return to shareholders than companies with the lowest representation".

A Women Matter report from McKinsey also states that "companies where women are most strongly represented at board or top management level are also the companies that perform the best".

In order to help women progress up the ladder, Airbus has devised a dedicated training programme for women, called GROW, which prepares them for senior management positions. Since its launch around 350 women have attended.

Women also need to be more confident in their abilities and improve their networking skills. "It is harder for them in environments such as aviation / aerospace where they are vastly outnumbered, but effective networking is vital to help make that next career move," explained Walker. She also cites mentoring as a key factor, also pointing out that it is "easier for men to mentor other men".

Encouraging more men to be comfortable mentoring women is a goal and setting up this type of scheme is one of the areas the Women in Aviation and Aerospace Committee is currently looking into.

While the number of women on boards does seem to be increasing overall, the pace is slow in the UK. McKinsey’s latest Women Matter report states that governments in Norway, Sweden, France, Italy and Belgium have legally binding quotas for the proportion of women on corporate boards. And it works – in France 20% of board members are now women, compared with eight percent in 2007. Walker is firmly of the view that quotas will have to be introduced into the UK too if the situation is also to improve.

The odds are consistently stacked against women climbing up the career ladder, confirms the McKinsey report. Women leave to have children, or sometimes even before as they believe they cannot achieve both professional and personal goals. Many women with top management potential choose to take a more junior role in order to sustain a work-life balance.

The RAeS’s report stresses the need for the industry to help women "progress through to senior level" and address the "long-hours culture", which affects both men and women who return to work after starting a family.

Despite the turbulent path ahead, Chabrian remains optimistic about the increasing numbers of women in the aviation and aerospace industries. "The opportunities are greater now than they have been in recent years," she concludes.

Today’s airport security checkpoints are a reflection of the turbulent times in which we live.