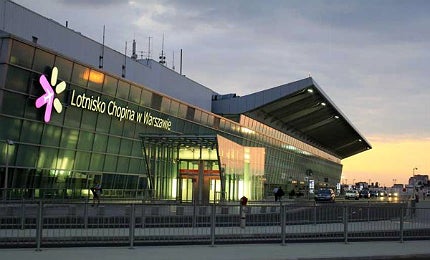 A review of which airports have the most followers on Twitter leads to something of a surprise when you get to fifth most popular airport feed: Chopin Airport (@ChopinAirport).

Warsaw Chopin Airport, on the other hand, does not make it into the top 100 busiest airports in the world – despite it being Poland’s largest, having welcomed almost ten million passengers in 2012 (Dublin received almost 19 million in 2011) – yet its Twitter following is closing in on Dublin’s lead with 28,457.

So what is Chopin Airport’s true raison d’être across its social media platforms – to boost the airport’s retail revenue or, perhaps, to build up an advertising channel? "No," said Przybylski Przemyslaw, Chopin Airport’s spokesman, "we don’t use Twitter as an advertising or sales platform, but rather as an interactive passenger service tool, where you can report any problems encountered at the airport."

With the aim of replying back to every tweet within 15 minutes, Chopin’s team aims to simply "provide accurate and useful information to passengers and help them if possible". It is not viewed as a business opportunity, but more a way to build an "airport-friendly community".

"Chopin’s team aims to simply "provide accurate and useful information to passengers and help them if possible"."

Przemyslaw explains that they are not afraid of "unfavourable opinions and complaints" either and respond to all negative feedback.Having to deal with more complaints – and publicly – is a well-known problem for businesses engaging with their customers. However, Iryna Kepych, a digital strategist at Connect, believes that communicating with the public through social media channels is exactly the right way to deal with negativity caused by the "age of annoyance" that we live in.

"People are easily frustrated by bad service, unfriendly environments, long queues and crowded places, and social media provides them with a platform both to express and broadcast this annoyance," said Kepych. "However, to avoid negative messages snowballing, airports should try to manage potential conflicts or complaints as and when they take place. Social media is the right place to resolve the conflict before it ignites into something much larger," she added.

A check back through Chopin’s Twitter feed shows followers’ appreciative tweets that speak for themselves. A tweet from @mpaluchowski on 1 December says: "@ChopinAirport has an active and actually useful Twitter account. Respect.", while @3marcin on 30 November tweeted: "@ChopinAirport actually gives individual answers to questions on flight schedule/delays."

Benefiting from the ‘mutual value’ factor

Engaging with and creating a positive airport community is not detrimental to a business, but it is a casual relationship where the exact results are often difficult to measure. However, savvy airport management with an engaged consumer base can boost revenue streams for the airport says Armand David, an expert in social media and the director of Brands2Life, which is measurable, so why aren’t Chopin’s social channels also focusing on short-term economic gain out of their communications?

For Przemyslaw the value is not monetary, but mutual. "Social media also serves as platforms where users can exchange information," he said. It’s already visible, there’s an increasing interaction between the users without our participation – this is a positive trend, showing that our Twitter community is active."

Size doesn’t matter – but eliminating too much ‘noise’ is critical

David believes that size of following is not necessarily indicative of the success of an airport’s digital communications with their passengers.

"In many cases, if an app or other digital or traditional communications strategy covers it, then a social channel may fall into the category of ‘nice to have’ and not be prioritised," said David, who explains that defining a social media strategy for an airport isn’t as simple as just posting all key updates on Twitter or Facebook.

"Given the needs of an airport, users are so specific and varied, an aggregation point on Twitter (or elsewhere) could prove too ‘noisy’. On the other hand, if an airport wants to differentiate its customer experience, and demonstrate leadership, delivering a strong social capability could be one aspect of that," he added.

Classless community – room for all the stakeholders

What makes Chopin’s communications really noticeable is not only its responsiveness and directness, but also its transparency. The airport’s social networks are not just used by the general public, but also by stakeholders with a vested interest in the airport’s operations. A recent report released by Chopin Airport noted that "now stakeholders can quickly find out what is going on at the airport via Facebook, Twitter and Blip".

"Having to deal with more complaints – and publicly – is a well-known problem for businesses engaging with their customers."

For Chopin, every person and every passenger matters, regardless of their position or status. "We do not see travellers in terms of statistical ‘millions’. Everyone will be given the same attention, regardless of his or her position and social status," said Przemyslaw. "I am convinced our business partners see this as our advantage." Chopin aims to take care of its customers "everywhere they are".

David, however, believes that not every airport should necessarily invest in proactive social media engagement, but puts the emphasis on the key being "understanding consumer expectations" and "having a channel to communicate with them", citing Heathrow’s smartphone app as a good example. However, despite this he points out that Chopin Airport is doing "exceptionally well by any measure", particularly as Social Bakers ranks Chopin as the number one Twitter brand in Poland.

This is further backed up by the airport’s engagement percentage for its Facebook page. The last analysis by Sotrender showed Chopin with ten percent engagement, which is impressive when, according to Przemyslaw, the average result for airport profiles is 4.6%.

From social traffic to passenger traffic

"Savvy airport management with an engaged consumer base can boost revenue streams for the airport."

While Heathrow Airport can boast a user-friendly and informative smartphone app as well as the highest number of Twitter followers, for many airports communication with passengers through an app-based medium will mean that the focus is not on Facebook or Twitter. However, with a mission to keep on improving its community, Chopin Airport is also developing a mobile application for smartphones, to improve communication with passengers further, which is due to be launched later on this year.

So, can an active and responsive social networking presence ultimately translate into more passenger traffic through the airport? "I don’t believe there’s data to prove or disprove this," said David. "It’s generally held that a well-used, good social media profile will boost customer experience, which should drive preference, but that won’t be short-term and in many cases the airport experience, for consumers anyway, is non-competitive."

But Kepych believes that when businesses engage with their customers effectively through social media that the effect is a cycle that regenerates itself – and this relates back to the "mutual" value, which for Przemyslaw is the most crucial benefit of an engaged social community.

"Exciting stories and interesting information shared on social media serve a double purpose: firstly, in an age where online reviews mean a lot, they help convert prospects into customers; and secondly, they make customers advocates, regenerating the cycle," said Kepych. "These people then also protect reputation – their positive messages counteracting the impact of any negative feedback."

"With the development of mobile communication, a company’s image on the internet will become even more crucial – and for quite some time now our actions have been aimed at building this image," said Przemyslaw. If the impact of engagement has a ripple effect long after the ‘send’ button is pressed, then Chopin Airport’s social networking strategy should serve it well in both the short- and long-term future.

IATA‘s Checkpoint of the Future programme promises to change the face of airport security, emphasising a differentiated screening system that makes use of biometrics and passenger data.