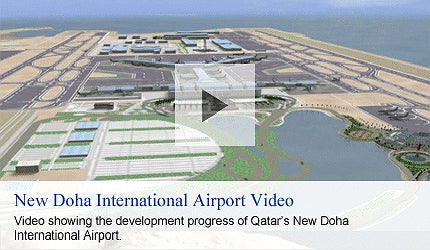 Back in 2006, when construction began on Qatar’s massive new greenfield air hub project, New Doha International Airport (NDIA), it seemed there was plenty for the Qatar Civil Aviation Authority (QCAA) to be cheerful about.

The development represents one of Qatar’s most high-profile public projects – a huge new airport set to triple the country’s previous passenger handling capacity and serve as the new home of Qatar Airways , as well as driving regional economic development and standing as a towering statement of the country’s prowess.

Well, nobody said building a world-class international airport from scratch was easy, especially one that will end up nearly twice the size of London’s Heathrow Airport. On a project as large as NDIA , cost and time overruns are virtually inevitable. Even so, the new airport, now set to open in 2013, seems to have suffered from an unusual number of setbacks and missed milestones.

"The most recent hold-up stems from trouble with the fit-out of the airport’s passenger lounges."

The trouble started in late 2007, when it was announced that the estimated total project cost had jumped from $5.5bn to $11bn. This doubling of the project’s cost was attributed to escalating prices for construction materials and the unforeseen expense of employing and housing skilled professionals from outside the country.

As an inside source told The Peninsula at the time: "The increase is mainly due to the crisis with raw materials. Countries like China and India are sucking up essentials like aluminium and steel. And cement availability still continues to be a problem here."

Furthermore, during the past few years, deadlines have proved to be as troublesome as costs. The airport’s original opening date of 2009 was pushed back to 2011 as contractors struggled to keep up with the ambition of the project’s steering committee, which wanted the facility to open with a larger initial passenger capacity than was outlined in the original Master Plan.

That 2011 date slipped to 12 December 2012, despite QCAA managing director Abdulaziz al-Noaimi telling reporters in February 2011 that around 80% of the work had been completed. Now the latest, and hopefully last, delay announcement has pushed back the full public launch of the airport to the second half of 2013, although the airport’s VIP and cargo terminals, as well as Qatar Airways’ on-site maintenance base, will reportedly make the December 2012 deadline.

"The trouble started in late 2007, when it was announced that the estimated total project cost had jumped from $5.5bn to $11bn."

The most recent hold-up stems from trouble with the fit-out of the airport’s passenger lounges. The contractor for these interiors, Lindner Depa (a joint venture between India’s Depa and Germany’s Lindner) has been yanked off the project, with its $245m contract terminated by QCAA.

The contract termination was prefaced by Lindner Depa having its contract performance bond and advance payment guarantee pulled by its client. Depa gives some insight into the problems in a June 2012 statement.

"The performance bond and advance payment guarantee encashment is due to Lindner Depa’s refusal to accept new non-favourable contract terms and conditions, including dropping all extension-of-time costs and acceleration costs, after being denied full access to the project site to perform its contract scope of work for the first nine months of this sixteen-month project.

"As a result of the delay, Lindner Depa has not been able to start all of its interior contracting work on site as planned and consequently, would not be able to meet its original contract completion date."

Despite the delays and acrimony, Qatar Airways CEO Akbar Al Baker recently outlined his hopes for NDIA in an interview with the Moodie Report, noting that the operational readiness programme had begun, leading up to the transfer of operations to the new airport.

Indeed, as the recently revealed interior concept designs have shown, there is still every chance that despite all the pain of its development, NDIA could be everything it was promised to be, way back in its 2003 planning stages.

QCAA and Qatar Airways are clearly aiming for perfection, no matter how high the costs soar.

But as these costs have increased, so too have the stakes. Once it (surely) opens in the second half of 2013, NDIA will have to be a truly world-beating air hub if it’s to be considered a success worthy of the expense.

The rising popularity of mammoth aircraft has led to a drastic need for runways long enough to cater for them. As airports adjust to handle aircraft such as the Airbus A380, airport-technology.com profiles some of the world’s longest commercial runways.

Air Force Expenditure in the Thailand to 2020: Market Brief