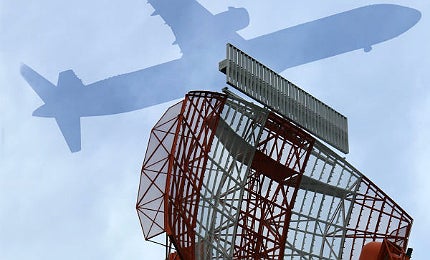 But, while politicians continue to lock horns over a reported Treasury shortfall of £1bn from the auction and media commentators debate the potential merits and pitfalls of broadband’s brave new world, a critical upgrade project undertaken by NATS, the UK’s leading supplier of air traffic control (ATC) services, has quietly slipped under many people’s radar.

The organisation, which provides ATC solutions to 15 UK airports, including Heathrow and Gatwick, and all en-route air traffic, has become the first operator to proof its radar systems against interference from the 4G network.

Analysis
A New Voice for Dublin

Analysis
Parking the A380

The upper band 4G spectrum covers the frequencies from 2.5-2.69GHz, while the S-Band radars NATS uses for air traffic control operate at 2.7GHz-2.9GHz. Given the close proximity of the two, there was the potential for 4G telecommunications masts to create significant interference on radar screens – with potentially catastrophic consequences.

"The impact on safety is fundamental in that we wouldn’t necessarily be able to detect all aircraft in our airspace."

"The impact of the 4G network on safety is fundamental in that we wouldn’t necessarily be able to detect all aircraft in our airspace," says Graeme Henderson, NATS’ general manager for engineering policy and design. "Airport radars are designed to receive very small signals among a lot of other electrical and weather noise – the 4G interference would create more noise for those radars to deal with, meaning the signals from small aircraft could potentially be lost.

"Airport radars are designed to identify relatively small targets, such as light aircraft and microlights over distances of up to 60 miles, so they have to be extremely sensitive," he continues. "Previously, we’ve not had to worry about the spectrum just below the 2.7GHz line, but now that the 4G transmissions are about to occupy that bit of bandwidth, we’ve suddenly had to make sure aviation radars are performing correctly."

NATS’ solution to the problem involves upgrading its existing radars with filters that suppress the electrical waves generated by 4G network frequencies. A similar screening technique will be deployed on a smaller scale in an estimated one million UK households with Freeview televisions to prevent reception problems following the roll out of 4G towards the end of 2013.

"The technology fix involves using a relatively standard piece of filter equipment to prevent unwanted signals being received," says Henderson. "However, in air traffic control terms you can’t just modify a radar system without proving that it is safe and that it still attracts the targets you want it to without other negative effects."

To this end, initial testing, design and flight trials were carried out on the NATS-designed NASR-10 radar at its Kincardine station in Fife, Scotland, and were completed and approved by the Civil Aviation Authority (CAA) in December 2012.

"We put an aircraft up in the sky to confirm that we could detect it and took measurements of the radar’s performance," explains Henderson. "Each class of radar has been the subject of a pilot study encompassing detailed testing and evaluation of the modification’s performance. We then produce a safety case describing the work and presented the evidence to the CAA."

NATS-operated radar stations at Glasgow and Edinburgh airports recently resumed service after becoming the first to receive the filter upgrade. However, the challenge of future-proofing all of the nation’s aviation radars is only just beginning, as operators scramble to hit the Department for Transport (DoT) deadline of September 2013 for upgrading their legacy systems.

"More than 40 civilian ATC radars in this S-band frequency, and around the same again operated by the Ministry of Defence (MoD), need fixing, so this is a major programme of work," says Henderson.

The task is made more arduous by the fact that NATS and its counterparts in the air traffic services sector have to upgrade a plethora of technologies of different ages and specifications, ranging from modern primary surveillance equipment to older models, such as the Watchman.

"Around half of the civilian UK’s radars are owned and operated by NATS," Henderson explains. "These range from relatively new, solid-state equipment that was installed in the last few years to systems up to 30 years old. There’s something like six types of radar used in the UK market and for each type of system the original designer had to come up with a solution that was going to fix the 4G problem, without adversely affecting safety and operational efficiency."

Henderson is quick to point out that the success of the 4G upgrade programme is dependent upon an unprecedented level of collaboration between the UK Government and industry stakeholders, including Ofcom, airports and rival air traffic management (ATM) companies.

"The government recognised that there were a lot of radars at different airports around the country that need to be modified and took an active, collaborative approach to ensure that the deadline was hit in time for the 4G rollout starting this summer, and that includes funding," he says.

Having designed and delivered a solution ahead of the deadline, NATS is now offering support and engineering expertise to other operators.

"Ofcom is trying to ensure that all operators using the spectrum are able to live side-by-side with each other and that’s why we’re sharing information about the approval process," says Henderson. "Each system designer has designed their own fix, but there is a lot of work that needs to be done to prove that it works and to produce a safety case for the CAA.

"NATS is working with a number of airport companies and radar suppliers on a commercial basis to ensure that their systems are rolled out over the next few months."

2020 and beyond: multistatic primary surveillance radar

On average, 26,000 flights take place every day across Europe’s skies alone. Passenger numbers are forecast to grow by up to 4.5% a year, in defiance of the ongoing economic downturn, and, according to analysis conducted by the European Commission, could almost quadruple by 2030.

Against this backdrop, competition for the UK’s already overcrowded airwaves will become even more intense, as will calls to overhaul the nation’s ageing radar system, which has been in place since the end of the Second World War and is struggling to deal with interference from 21st century phenomena, such as onshore wind turbines.

"The EU is already looking to release more spectrum for next-generation 5G mobile services by 2020."

"All radar frequencies are ultimately owned by the nation and licensed out by Ofcom, with different parts of the spectrum allocated to different types of users," says Henderson. "As mobile usage and demand becomes greater and more widespread, so the pressure on the spectrum increases."

One of the radical solutions being promulgated involves multistatic primary surveillance radar, the subject of an ongoing two-year research project by radar provider Thales, with involvement from NATS, and funding by the Technology Strategy Board.

The proposed system works by using existing TV transmitters around the UK. Each aerial will receive the identical TV signal, but at a slightly different time, due to interactions with nearby air traffic. The received signals are then compared to the original broadcast, and the difference is used to pinpoint the position of the aircraft.

The EU is already looking to release more spectrum for next-generation 5G mobile services by 2020; multistatic primary surveillance technology would free up that space, meaning the UK Government could sell off bandwidth currently used by air traffic control.

Radar systems, like everything else in the commercial aviation industry, rarely remain static for long.