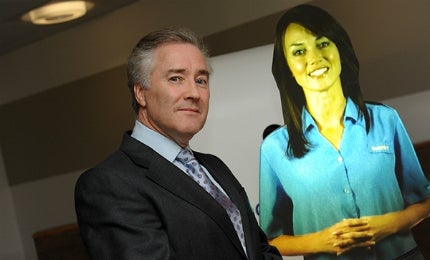 The pressure to cut delays will always weigh heavily on airport operators’ shoulders, even as terminals expand and congestion eases, but here to take a load off is a new breed of worker – the holographic helper.

These helpers – also known as avatars – are able to solve airport dilemmas ranging from guiding customers to the nearest bathroom to advertising products and promotions.

At security, dawdling travellers are being transformed into prepared passengers by these virtual assistants, who also provide instructions on removing belts and jackets and separating liquids from hand luggage.

"At security, dawdling travellers are being transformed into prepared passengers by these virtual assistants."

The first avatars were rolled out at Luton and Manchester airports in 2011. At London Luton, ‘Holly and Graham’ greet passengers at security and remind them of what they can and can’t take on board the plane.

Developed by Musion, a British company that specialises in queue management and digital signage, these assistants are 3D holograms of customer representatives projected on to a pane of glass.

Since then, Birmingham and Bristol airports have also installed the technology.

Across the Atlantic, Washington Dulles Airport became the first airport in the US to test a life-size hologram in January 2012. Paige, as she is known, tells travellers how to get through customs and helps people organise their boarding documents in order to eliminate traffic.

"From a management point of view, holographic helpers are shining stars in the workplace."

Paige can’t respond to passengers’ questions, but an upgraded version currently in the works will be more interactive, according to her manufacturer, Tensator, a queue control solutions provider.

The devices apparently cost about $250,000 each, but the Wall Street Journal says the Port Authority is spending $180,000 to rent them for six months.

Avatars: a threat to workers?

From a management point of view, holographic helpers are shining stars in the workplace.

As Libby boasted on her first day at LaGuardia, she never takes a break, won’t charge overtime, hardly ever takes sick (maintenance) leave and doesn’t require a background check.

She sounds like a bit of a suck up, but how will Libby and her fellow avatars improve the passenger experience?

"It will make the passenger experience better in two ways," says London Luton Airport managing director Glyn Jones. "First, they will be compelling – they are remarkable to look at – and they will also be consistent in the messages that they give.

"If they do that and people respond to them by taking off their belts and putting their laptops out and dealing with liquids as we ask them to do, then they will get through security more quickly," Jones told the BBC at the time of Luton’s hologram unveiling.

So will hologram helpers eventually replace real employees? "No," says Jones, emphatically. "We have 350 members of security who do an irreplaceable job for us. What these [holograms] are going to do is helping to do their job by communicating compellingly and consistently."

Manchester Airport is on the south side of the Manchester conurbation adjoining countryside in the county of Cheshire.