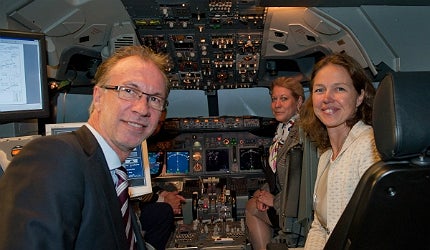 Green Connection is a project led by LFV, a public enterprise in Sweden which operates air navigation services across the country. The project was carried out in collaboration with Swedavia , SAS, GE Aviation and ROCKWELL COLLINS and has been part funded by SESAR (Single European Sky ATM Research).

The project is being administrated by the AIRE (Atlantic Interoperability Initiative to Reduce Emissions) programme, the main focus of which is to capitalise on current aviation technology which will improve operational procedures and reduce greenhouse gas emissions in the short-and medium-term future.

"The "green flight" concept is an LFV creation which comprises of three aspects: green departures, direct routes and green approaches."

The "green flight" concept is an LFV creation which comprises of three aspects: green departures, direct routes and green approaches. Green approaches have been made at Stockholm Arlanda Airport since 2009; these have been implemented through the use of an even descent (a so-called Continuous Descent Approach, or CDA ) with minimum thrust. Direct routes have also been made shorter through the FRAS initiative (Free Route Airspace Sweden), which reduced carbon dioxide emissions by 45 tons in 2011.

The next step was to shorten the approach paths to runways using RNP-AR performance-based navigation (PBN) technology. Following the two approaches implemented into Gothenburg-Landvetter Airport in 2011 and one at Stockholm Arlanda Airport 01R back in 2008, a fourth RNP-AR has now been deployed at Arlanda’s runway 26.

The technology will reduce carbon emissions by 100-165kg for each approach and the flight path by more than 20 kilometres. When accumulated across many flights, these combined factors have the potential to make a significant impact on both the environment and operator’s fuel costs. Using RNP-AR technology also means it is possible to create flight paths which avoid densely populated areas near airports and noise sensitive areas.

Torborg Chetkovich, Group CEO of Swedavia, said: "Full utilisation of this latest navigation technology would shorten flight paths at Swedavia’s airports, in one year alone, by a distance corresponding to twenty five around-the-world flights. This is a major contribution to fuel economy and reduced climate impact."

PBN is categorised as RNAV (area navigation) and RNP (required navigation performance). Area Navigation, RNAV, is a navigation method allowing aircraft to navigate from point to point without reliance of ground navigation aids, using GNSS to precisely guide the aircraft. RNP is RNAV with onboard monitoring of navigational accuracy.

"Green Connection is a project led by LFV, a public enterprise in Sweden which operates air navigation services across the country."

The Green Connection project management team chose to implement RNP 0.3nm, despite RNP 0.1nm being in operation for some aircraft, and with the potential to reduce track miles flown even further in order to maximise the number of potential users.

"In addition to this a 4DT (four dimensional trajectory) study was performed on the gate to gate flights between Gothenburg and Arlanda to validate the accuracy and stability in the time domain which affects the predictability of operations," added Olsson.

""This is a major step forward," said Rickard Gustafson, Group CEO of SAS. "Our goal is to reduce our emissions by 20% by 2015 over 2005 levels, traffic growth included."

In order to fly this route and use the RNP function, the operator will need to be equipped, certified and approved.

Aircraft need to be equipped with multiple GPS receivers integrated with dual FMS systems and be capable of actual navigation performance monitoring and alerting, while the operator must prove that their pilots have received RNP-AR recurrent operational training and specific approval must come from the civil aviation authority (Transportstyrelsen in Sweden).

Currently it is only airline SAS (Scandinavian Airlines) that is fully approved to fly this specific approach, but a large portion of air traffic have the potential to use it.

"According to CFMU information, which lists all scheduled flights for different airspace sectors, of all the traffic that enters the west entry point ELTOK inbound at Arlanda airport, approximately 70% are equipped and therefore potential users of the new procedure," said Olsson.

Operators who wish to fly the procedure are responsible for ensuring that they are certified and approved to do so.

"This is a major step forward," said Rickard Gustafson, Group CEO of SAS. "Our goal is to reduce our emissions by 20% by 2015 over 2005 levels, traffic growth included.

"Along with newer, more efficient aircraft, improved energy efficiency in daily operations and using a blend of renewable aviation fuel, the development in this area is extremely vital to the realisation of our sustainability."

Thanks to the success of the scheme, new RNP technology is currently being rolled out across Sweden. "Swedavia and LFV are planning to continue the implementation of PBN technology to airports in Sweden since the technology has proven a great potential of reducing aviation’s environmental impact," said Olsson.