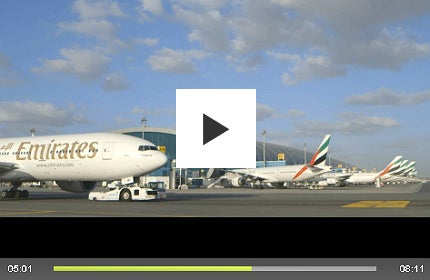 Staff at Dubai International Airport saw in the new year by busily preparing for the opening of its Concourse A hub – the world’s first facility dedicated completely to the A380. On the 2 January 2013, staff at the brand spanking new facility, located in Terminal 3 of the airport, waved off its first ever flight; a 1430hrs departure from Dubai to London.

"Concourse A is intended to create space for the airport’s anticipated increase in passenger traffic."

Concourse A is part of the Terminal 3 complex exclusively built for the use of the Emirates airline – which is expected to be the second biggest airline in the world by the end of the year – and another critical element of the airports $7.8bn Strategic Plan 2020. Government-owned Emirates is the largest operator of A380, with a fleet of 31 and another 59 units on order.

The build up to the first phase opening – only four of the 20 gates opened in this phase – began in early December when staff and passengers were invited to take part in a trial run of the hub’s facilities and functionality. Thought to be the first trial run of its kind, it involved passengers with fake boarding passes, to various destinations, trying to pass through security and passport control and indulging in a spot of shopping and refreshments – the only element missing being the actual take-off.

With 11 floors, 20 gates and a total area of 528,000 square metres, Concourse A is intended to create space for the airport’s anticipated increase in passenger traffic. Airport officials expect an increase of 15 million passengers, from 60 million to 75 million, when Concourse A is in full operation. Official traffic figures for 2012 alone are expected to be as high as 57 million.

Paul Griffiths, CEO of Dubai Airports, speaking about the opening of Concourse A, said: "Just as we did with what turned out to be a flawless opening of Terminal 3 and Concourse B in 2008 – which was a much larger and more complex exercise involving the complete transfer of the Emirates airline’s operations to the new facility – we are opening Concourse A in stages with more gates coming online in each successive phase.

"Passenger traffic in the first 11 months of last year alone climbed by 13.1% to 52.6 million, with forecasts even higher for this year."

"We believe that this approach of gradual transition will enable us and all our partners to ensure smooth operations and help us to deliver on our customer service commitment."

Another key business move that could accelerate Dubai International Airport’s lofty ambitions is Emirate Airline’s ten-year partnership with Qantas, which was agreed and signed in September last year and is due to take effect in April.

Their partnering makes Qantas the only other airline that will be operating at Terminal 3’s new purpose-built A380 concourse, with 98 weekly services ferrying between Australia and Dubai, providing a boost to the airport’s passenger figures.

Listed on Wikipedia as the 11th busiest airport in the world (rated from passenger traffic figures in the first half of 2012), up from 20 in 2008, Dubai International Airport is already edging closer to its holy grail. Passenger traffic in the first 11 months of last year alone climbed by 13.1% to 52.6 million, with forecasts even higher for this year. Alongside the equally ambitious Emirates airline, the sky really is the limit for Dubai’s number one aviation hub.