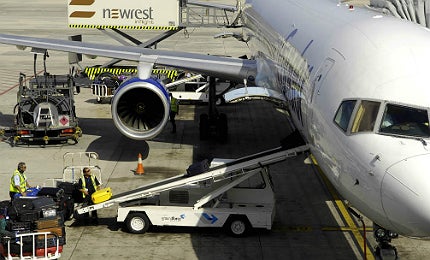 Dubai’s Al Maktoum International Airport will begin passenger operations on 27 October 2013, it was announced in April.

Having been open for cargo operations since summer 2010, the airport’s passenger terminal was completed in 2012 with an initial design capacity of seven million passengers a year.

The airport’s runway will be able to accommodate large modern aircraft, such as the Airbus A380, and will be served by 64 remote aircraft stands.

Upon its scheduled completion in 2020, Al Maktoum International Airport is intended to become the world’s largest airport with five runways, and passenger capacity is planned to be expanded to 80 million passengers by 2027.

Things aren’t running so smoothly for the launch of Qatar’s new air hub in Doha, Hamad International Airport, which has suffered another in a long list of delays, stretching back to its original planned opening in 2009.

The airport, previously known as New Doha International Airport (NDIA), was scheduled to have its first phase opening on 1 April 2013, but the commissioning date has now been pushed back to an unspecified new time.

The cause of the new delay is failure to meet new safety and security standards after issues were raised by Qatar’s Civil Defence Department. The existing Doha International Airport will operate until Hamad International is fully commissioned, upon which the older airport will be used by various government agencies, including Qatar’s defence forces and the Civil Aviation College.

Tampa International Airport in Florida, US, has unveiled its expansion and modernisation plans for the future, which will involve investing $2.5bn to streamline operations and expand capacity. The 20-year plan calls for three phases of construction by 2041.

Upon its scheduled completion of the third phase, construction on which is expected to start between 2020 and 2028, the airport will have increased its annual passenger handling capacity to 34.7 million passengers.

Norway’s airport operator and air navigation service provider Avinor is planning a €4.9bn project to boost the passenger capacity of the country’s airports, in anticipation of rising passenger traffic in the coming years.

As part of the investment plan, which will run from 2014 to 2023, Avinor will spend €1.6bn to build the new Terminal 2 at Gardermoen Airport in Oslo.

The ANSP will also invest €533.8m for a new Terminal 3 at Bergen Airport in Flesland, which is scheduled to be completed in 2019. Part of investment will also be used for the modernisation of Stavanger and Trondheim airport until 2020 to boost capacity.

Under the new proposal, all airports with a capacity of at least 15 million passengers and / or 200,000t of freight per year will have to deploy at least three ground service providers, up from the current two providers.

The vote to pass the proposal was originally due in December 2012, but was postponed amid protests; the new proposal has been adopted by 455 votes to 239, with 18 abstentions. The revised policy, which comes after the partial liberalisation of airport services in 1996, has been intensely opposed by trade unions, which fear that it will impact salaries.

Stockholm Arlanda Airport‘s Terminal 2 has reopened after a major refurbishment project. The terminal has been expanded by 2,000m² and will be further developed in 2015, with the addition of a new baggage sorting facility, bringing the total investment up to SEK400m ($60m).

The refurbishment added new duty-free shops and restaurants, as well as a new lounge on the upper level of the terminal.

Stockholm Arlanda Airport director Kjell-Åke Westin said the improved Terminal 2 will mean passengers have a better all-round experience. "It takes no more than 15 minutes to get from the train, bus or car to the gate," Westin said. "Along with this smooth flow, passengers will get the feeling of being at a cosy little airport contained in a big one."

The Canadian Government has announced its plan to introduce a new security risk assessment scheme across all airports in the country.

Proposed as part of new regulations to prevent terrorism and other threats to aviation security, the system would include new security training and strategies at airports, estimated to cost $11.6m over 25 years.