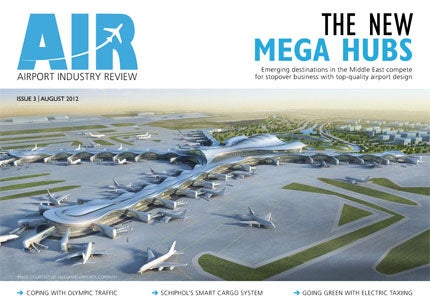 In this issue we take a look at routes and destinations. The Olympic Games will be welcoming eight million ticket holders and the Paralympics two million this summer, meaning London’s airports will have their work cut out. With Heathrow already under fire in the press, we look at how well prepared UK airports really are for 2012’s Olympic and Paralympic Games.

As emerging Asian and Middle Eastern destinations compete for stopover business, top-quality airport design is a must. We ask leading architects about the creation of new major transport hubs in the regions.

We also take a look at BAA’s IT blueprint for the future and ask Moscow’s Sheremetyevo airport how a new management centre has improved efficiency and find out how a new green taxiing system by Safran and Honeywell could help airports cut carbon and cost.

Finally, we ask operators at Amsterdam Airport Schiphol how a pioneering smart cargo system has cut down on bureaucracy and check points, but improved the speed, safety and reliability of transactions.

Up in the AirWith Heathrow already under fire in the press, we look at how well prepared the UK’s airports really are for 2012’s Olympic and Paralympic Games. Read the full article.

The X FactorAs emerging Asian and Middle Eastern destinations compete for stopover business, top-quality airport design is a necessity. We speak to Anthony Mosellie and Mustafa Chehabeddine of international architectural practice Kohn Pedersen Fox about striking the balance between form and functionality. Read the full article.

Blueprint for the FutureAfter a period of headline-hitting events and heavy criticism, BAA is about to buck the negative trend. We talk to CIO Philip Langsdale about the role of technology in BAA’s blueprint for the modern airport. Read the full article.

An Investment in EfficiencyMoscow’s Sheremetyevo International Airport has become the latest facility to invest in a management centre. This will coordinate the activities of the many business partners that make an airport operate efficiently. We ask IT director Igor Khokhlov how the project is already reaping tangible benefits. Read the full article.

Cutting Carbon and CostsWe find out how a new green taxiing system developed by Safran and Honeywell could help the aviation world cut carbon along with costs. Safran’s vice president of sales and marketing Frédéric Crancee gives us the run-down of this high-profile project. Read the full article.

Thinking Smart To meet stringent regulatory requirements, many airport operators are bogged down in paperwork and safety checks. We meet Amsterdam Airport Schiphol’s Enno Osinga to find out how the facility’s pioneering SmartGate Cargo system has cut down on bureaucracy and check points, but improved the speed, safety and reliability of the airport’s cargo transactions. Read the full article.

In the next issue we take a look at winter operations. Airports and airlines are gearing up to keep flights moving smoothly during a season of adverse and often unpredictable weather. We explore the latest measures and technologies for winter operations.

Security We find out how mathematical modelling and game theory can be used to make airport security less predictable to aggressors.

AirfieldsWe focus on how advances made in lighting technology and solar power generation have made it easier to light airfields in a more cost-effective way.

Passenger HandlingWe find out how artificial intelligence and predictive modelling could transform the way airports react to the inward flow of passengers.

The next issue will be out in November. Sign up for your free subscription to get it delivered directly to your inbox.

The digital magazine is viewable on any computer with Flash Player installed. It is also viewable on mobile devices, iPhones and iPads, although some features and videos may be disabled.

View the archive of back issues.