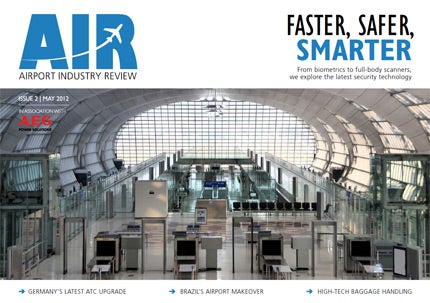 Airport operators and technology providers innovate constantly to increase air traffic security while keeping the passenger flow running smoothly and efficiently. In this issue we take a look at the latest airport security technology and find out how new systems are being accepted by operators and passengers. We investigate why the take-up of highly promising biometrics-based identification technology is still being hampered by controversy, and ask Manchester Airport Group about its experiences in trialling full-body scanners.

We also take a look at Germany’s latest ATC systems upgrade, explore new technologies that promise to streamline baggage handling processes – including an advanced robotics system on trial at Amsterdam Airport Schipol – and find out how aircraft refueling operations can achieve the perfect balance between speed and safety.

As Brazil gears up to host the 2014 World Cup and the 2016 Olympics, many of the country’s airports are getting a major makeover. We check in on the expansion progress and find out what it means for the Brazilian aviation sector.

There has always been some controversy surrounding the use of biometrics-based identification systems. We investigate what is holding this technology back and how it could be used in future. Read the full article.

To Scan or not to Scan

Full-body scanners have been in operation at Manchester Airport in the UK airport for almost three years now. We speak to Manchester Airports Group to find out about their experience with the trial project and how public attitudes towards it have changed. Read the full article.

Eyes to the Sky

The aim of air traffic control is to keep the sky as safe as possible. German air traffic provider, DFS tells us how it manages and improves the safety process with the very best air traffic management technology available. Read the full article.

In preparation for the 2014 World Cup and 2016 Olympic Games, Brazil is on a mission to give its airports their biggest makeover. Read the full article.

One of Brazil’s largest airports is having a passenger terminal built at an estimated cost of $700m. We take a look at the airport and its new terminal, which is due for completion in 2014. Read the full article.

Baggage handling has a reputation of being a miserable part of the air passenger’s travel experience. We check out the increasingly sophisticated technology to streamline the baggage handling process simplify this troublesome task.Read the full article.

As airports become busier and margins tighter, the pressure to turn an aircraft around and prepare it for take-off quickly is growing by the day. We talk to Dennis Burchell of FMGI about how safety and efficiency can be given equal priority. Read the full article.

In the next issue we take a look at routes and destinations. As emerging Asian and Middle Eastern destinations compete for stopover business, top-quality airport design is a must. We ask leading architects about the creation of new major transport hubs in the regions. We also pay a visit to Budapest, the host city of Routes Europe 2013.

IT and data management: We explore how artificial intelligence and predictive modelling could transform passenger flow management, look at BAA’s IT blueprint for the future and ask Moscow’s Sheremetyevo airport how a new management centre has improved efficiency.

Cargo handling: We ask operators at Amsterdam Airport Schiphol how a pioneering smart cargo system has cut down on bureaucracy and check points, but improved the speed, safety and reliability of transactions.

Ground operations: We find out how a new green taxing system by Safran and Honeywell could help airports cut carbon and cost.

The next issue will be out in August. Sign up for your free subscription to get it delivered directly to your inbox.

The digital magazine is viewable on any computer with Flash Player installed. It is also viewable on mobile devices, iPhones and iPads, although some features and videos may be disabled.Read the latest issue.View the archive of back issues.