In December 2011, the EU announced plans for a controversial emissions tax on airlines; since 1 January 2012, airlines have been charged for carbon emissions created by flights to and from EU member states. The US, Canada and China have all openly opposed the scheme, with US carriers claiming that the charges violate climate change and aviation pacts, and four Chinese airlines stating that this tax could cost them €95m.

Conversely, the scheme could have a positive impact on emerging destinations in the Middle East, which will become increasingly attractive as transit hubs for many of the larger North American carriers. Moreover, this will only serve to bolster the strategy of building ‘airport cities’ that many Middle Eastern destinations have put in place in an aim to attract stopover traffic to their shores.

"There are two components of airport design that are crucial to get right: quay frontage and terminal curb frontage."

"The predominance of land in the Middle East has led to the creation of these major transit hubs, and world-class airlines and destinations to compete with the legacy carriers in North America and Europe," says Kohn Pedersen Fox (KPF)’s Anthony Mosellie, who is serving as principal-incharge of the Abu Dhabi International Airport Midfield Terminal Complex.

"These regions have vast land resources, but fewer cities, making the idea of creating an airport city very attractive." 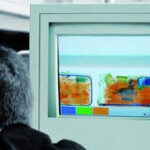 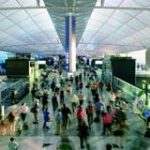 Mustafa Chehabeddine, KPF’s principal of the new passenger terminal complex at Abu Dhabi International Airport, agrees. "These destinations are all fighting for transfer passengers and, as such, the quality of the space you stop in suddenly becomes very important," he explains. "This is without a doubt a new phenomenon in certain parts of the world – the airport as a city, rather than the airport as a processing machine."

Abu Dhabi International Airport, a project for which KPF has been acting as master planner and lead architect for the past six years and which is touted for completion in 2017, is a prime example of this new breed of mega transit hub; at over seven million square feet, the project is one of the largest currently under construction.

"Abu Dhabi airport is a prime example of this new breed of mega transit hub."

"It’s not just an airport; it’s part of a city," says Chehabeddine. "We conceived of it as a gathering space, a civic space – we have an art gallery, a hotel and even an office building in the airport."

For Chehabeddine, the Abu Dhabi project is not about processing; it’s about extending the amount of time passengers are able to spend in the central, civic space.

"For transferring passengers, this is going to be their only experience of Abu Dhabi, so it needs to represent the city," he says. "It’s about minimising waiting and queue times; passengers can now spend time in a city as opposed to rushing from gate to gate. Conceptually, we’ve gone for big, column-free spaces as opposed to corridors, and we’ve elevated the roof so it looks almost like a sky – it’s all linked to the idea of creating a city."

Until the early 2000s, KPF’s airport projects were primarily found on the eastern seaboard of the US where the practice, with Mosellie at the helm, designed facilities in cities including Philadelphia, Washington and Boston. The concepts of these airports were very different to the airport city the firm is working on in Abu Dhabi, something Mosellie admits was a new challenge.

"We weren’t sure how much of the design strategies, requirements and regulations would be transferable," he says. However, KPF’s team quickly realised that the fundamental aspects of airport design are universally applicable: "A 747 is a 747, whether it’s in London or Chicago."

For the KPF principal, there are two components of airport design that are crucial to get right, irrespective of size, location or design concept: quay frontage and terminal curb frontage.

"You can never entirely future-proof an airport – these projects have life expectancies of 60-70 years – but we always try to maximise the land utilisation from a real estate perspective to give us the best chance of future proofing the airport," he explains. "It’s all about the functionality of the planning; you have to be very efficient in the design to protect and safeguard those two real estate assets."

Sustainability is becoming a key priority for airport designers, and one that Mosellie believes begins with airfield design.

"The X-shaped facility’s main terminal is the first of its kind. KPF spent six months proving to the airport operators that this was the optimal solution."

"The greatest creators of emissions are the service vehicles around the terminals that transport goods and baggage, as well as the planes when they are moving to take-off and landing positions," he says. "When it comes to working with runway configurations, you need to create flexible, efficient routes so taxiing time is minimised from a sustainability standpoint."

This combination of real estate asset protection and sustainability is evident in the design of Abu Dhabi International Airport. The X-shaped facility’s main terminal is the first of its kind, which meant the KPF team had to spend nearly six months proving to the airport operators that this was the optimal solution.

"We carried out simulations showing how the planes can reach a particular point in the shortest amount of time, and how walking distances are reduced for passengers," Chehabeddine explains. "Eventually, we proved that an X is the right solution."

Only after the airport’s functionality and efficiency have been proven is it time to think about the details of its architectural character, Mosellie is keen to emphasise.

"Rather than starting with a big idea, such as an arched roof, we focus on those two very functional planning strategies and within those, we look for architectural opportunities that will enhance the passenger experience and increase the commercial opportunities within the building," he says. "If you can crack the efficiency question, you can build the smallest facility with the maximum passenger throughput, and create a situation where you’re not competing for dollars to spend on the architectural elements that the passengers come into contact with."

Designers are then able to come in and develop uplifting spaces, which serve to facilitate a stress-free, user-friendly passenger experience.

"We also try to bring that same idea of efficiency into the passenger movements within the facility," Mosellie adds. "The more intuitive the wayfinding is within a terminal facility, the more passengers can anticipate where they’re going without the use of signage; they can just follow the flow of the spaces."

The airport’s undulating ceilings were conceived for precisely this purpose, while the main terminal’s supporting arches, one or two of which could become some of the largest spanning arches ever built in an interior space, are similarly functional.

"It gives the airport the flexibility to move counters and make other changes in the future, as well as creating the open, civic-like space we were looking for," says Chehabeddine.

Flexibility is essential for any modern airport project, Mosellie agrees.

"The one constant in airports is change," he says.

From security regulations that can change significantly, even during the design phase of a project, to advancements in technology that can render aspects of an airport obsolete overnight, flexibility must be built in. This is true not only when it comes to security checks and use of technology, but also when considering passenger expectations.

As Asian and Middle Eastern airports begin to position themselves as transit hubs rather than processing machines, there’s little doubt that uplifting airport design is gaining in importance. But as the KPF team have demonstrated with their Abu Dhabi project, form should never come ahead of functionality.