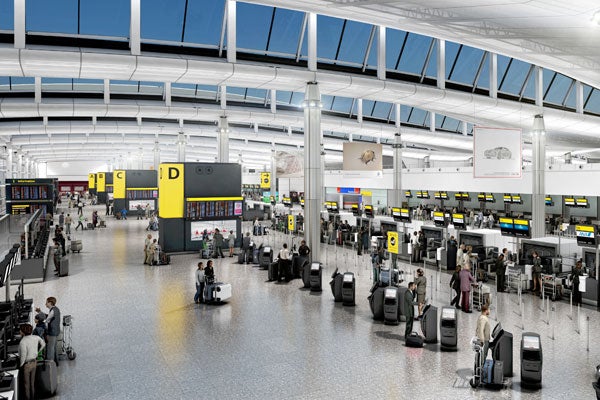 London Heathrow Airport has been witnessing a surge this year, with traffic growing by more than three percent compared to 2012. The airport handled 48.2 million passengers in the first eight months of 2013, serving approximately 191,200 passengers daily.

The 87m tall Air Traffic Control Tower at the airport is the tallest in the world. The airport serves 84 airlines and connects 184 destinations in 80 countries.

The airport was officially opened in 1946 as London Airport. The fifth terminal was commissioned in 2008, while Terminal 4 was refurbished in 2009.

Handling more than 24 million passengers in the year leading to August, London Gatwick Airport is the second busiest airport in the UK in 2013.

The airport was initially owned by the British Airports Authority, but ownership was transferred to Global Infrastructure Partners (GIP) in December 2009 and it is now operated by Gatwick Airport Limited (Gatwick).

The airport serves 45 airlines connecting 197 international destinations in 90 countries, as well as 12 domestic destinations. The airport is about 48km from London and features the world’s busiest single runway.

The airport features 346 check-in desks and 115 aircraft stands. It employs 23,500 people on site in addition to generating 20,000 indirect jobs and approximately £2bn revenue to the economy of London and the South East on an annual basis.

Manchester Airport, located within a 20 minute drive from central Manchester, is the main international gateway for the north of England and is the largest regional airport in the UK. The airport handled more than 13.5 million passengers during the first eight months of 2013, making it the third busiest in the UK.

The airport is mainly owned by Manchester Airports Group (MAG), which also acts as the operator. The airport serves more than 100 airlines and connects 225 destinations worldwide.

The airport was officially opened in June 1938. It has generated 19,000 direct jobs on site and 42,500 jobs in the north-west of England. The baggage system of Terminal 2 alone is four kilometres in length and handles 20,065 bags on an average day.

London Stansted Airport served more than 12 million passengers in the first eight months of 2013, becoming the fourth busiest airport in the UK. The airport was formerly owned by BAA, but ownership was transferred to Manchester Airports Group (MAG) in January 2013.

Construction works for the existing airport commenced in 1986 on the site of a former airport. The airport was officially opened in 1991.

Planning applications for a new airport with two runways and two terminals was submitted in March 2008, but was later withdrawn. A terminal redevelopment project worth £80m ($128m) is currently underway at the airport.

The airport features a 2,160m runway and two terminal buildings constructed respectively in 1985 and 1999, and a cargo terminal. It employs more than 500 people in direct jobs and 8,000 in indirect roles.

Capacity expansions are expected to be carried out in the next 15 years to cater to an additional 15 to 16 million passengers per annum by 2028.

Edinburgh Airport, which handled 6.5 million passengers in the first eight months of 2013, is the sixth busiest airport in the UK. The airport, opened in 1977, currently serves about 24,600 passengers on an average day.

The airport is owned and operated by Global Infrastructure Partners (GIP), which took ownership of the airport from BAA in June 2012. The airport serves 40 airlines, features two runways and a terminal, and employs about 2,500 people.

The terminal building is currently being expanded with an investment of £40m ($64m). A new £25m ($40m) expansion project involving the construction of a new 6,000m² building, housing a security hall and retail areas, is also currently underway at the airport.

The security hall is set to open in 2014, while the retail spaces will be opened in 2015. The project forms part of a £150m ($241m) investment programme aimed at making improvements at the airport.

Birmingham Airport, located about 13km east of Birmingham city centre and 75km from central London, served about 6.1 million passengers from January to August 2013, becoming the seventh busiest airport in the UK. The airport also witnessed its busiest day this year on the 23rd of August, with 36,781 people passing through the terminal.

The airport is currently owned by the seven West Midlands council authorities, Airport Group Investments and the Employee Share Trust.

The main runway, measuring 3,003m, is currently being extended by a further 405m, with an investment of £33m ($53m). The project is being carried out by a joint venture comprising of VolkerFitzpatrick and Colas. The project forms part of the Airport’s Master Plan which will be carried out until 2030. The extended runway will be completed by early 2014. The auxiliary runway at the airport measures 1,315m in length.

Glasgow Airport, located approximately 11km west of the Glasgow city centre, served more than 4.9 million passengers from January to August 2013, becoming the eighth busiest airport in the UK. Up to 20,000 passengers pass through the airport’s terminals every day on an average.

The airport is owned and operated by BAA. It features a single 2,658m long runaway and two terminals. The second terminal serves as a check-in facility. The airport serves 30 airlines and connects 100 destinations.

The airport officially opened in June 1966. A major £30m ($48m) scheme was launched in May 2007 to extend the main terminal and improve the airport facilities.

The scheme, known as Glasgow Airport Skyhub Project, was completed in October 2008 with REID Architecture providing the design and Balfour Beatty acting as the main building contractor. The airport published its 25 year outline Master Plan aimed at increasing the passenger capacity to more than 24 million by 2030.

Bristol Airport, located 13km south-west of Bristol city centre, is the ninth busiest airport in the UK. More than 4.15 million passengers passed through the airport’s terminal from January to August 2013.

The airport also witnessed the busiest month in its history in August, handling more than 700,000 passengers.

The airport was officially opened in May 1930, and is currently owned by Cintra and Macquarie Bank who purchased it from First Group and Bristol City Council for £189m ($303m) in 2001. It features a terminal building, which was opened in March 2000. The airport has a single 2,000m asphalt runway operated by Southwest Airports.

The airport is expected to handle 10 million passengers per annum by 2020. The airport’s Master Plan, published in 2006, includes a number of developments until 2030.

The airport was opened in 1935. It features a 2,329m long runway and a terminal. It has 26 passenger aprons and three freight aprons.

The airport connects 81 destinations worldwide, and provides 3,200 on site jobs and a further 4,600 jobs across the region. The airport’s 45m air traffic control tower, designed by Reid Architecture, was commissioned in 2007. The airport is expected to serve 10 million passengers per annum by 2016.

The top 10 highest altitude airports in the world

China has breathtakingly high airports, hosting eight of the 10 highest altitude airports in the world, including the world’s highest Daocheng Yading Airport 4,411m above sea level.

Airport-technology.com in association with AIR magazine is proud to announce Heathrow as the winner of the inaugural 2013 AIR Passenger Services Award for their Positive Boarding technology.