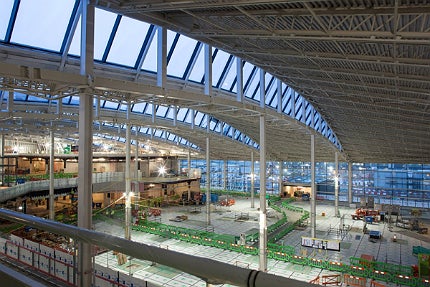 Departures have historically been one of the trickiest and most labour-intensive aspects of the airport process, both for the operators attempting to usher travellers through check-in, security and boarding, and passengers shuffling from one spirit-sapping queue to the next.

As a result, airports have been working hard in the last decade to streamline this all-important first phase of the passenger experience. From online check-in and bag drop kiosks to biometrics and enhanced security systems such as IATA’s Checkpoint of the Future, the industry is coming up with new ways to make life easier for airports, airlines and passengers alike.

On a fundamental level, these new technologies are supported by hidden layers of software and sophisticated data systems, allowing airports to automate vital validation functions and start removing the hassle from the traditional departures experience.

London Heathrow, the UK’s busiest air hub, has been at the forefront of this field for several years with an active programme of trials and launches of self-service, biometrics and enhanced validation processes, as Heathrow Airport’s passenger process programme leader Mark Walker explains.

"We’ve been taking quite a rigorous approach to exploring what good ideas we’ve got in-house or with our airlines, or indeed with industry best practices that are emerging, trialling some of those to really understand whether it is what our passengers want here at Heathrow, and then selectively deploying those technologies."

"Positive Boarding is due for its next deployment in Heathrow’s Terminal 4."

The most recent departures innovation being rolled out by Heathrow is Positive Boarding, a passenger-friendly method of improving flight punctuality, which was recently shortlisted as a nominee for Airport Industry Review’s Innovation in Passenger Services Technology Award.

The scheme, which has now been introduced for Virgin Atlantic flights from Terminal 3, as well as United Airlines and Little Red departures from Terminal 1, leverages and expands the airport’s existing data management software to improve passenger information and reduce the chance of tardy travellers holding up flights by not reaching their boarding gate in time.

The system starts with a ‘ticket presentation point’, a row of automated entry gates just before the security area, where passengers scan their standard boarding passes on their way to security. Individual passengers are identified through the data on their boarding pass barcodes, and the data is collated alongside central flight information.

The system then verifies the passenger is entering the right terminal for their flight and works out how much time they have to reach their boarding gate. Based on this information, messages are sent both to the passenger and the relevant airline. In this way, passengers can be kept informed of any time issues for boarding their flight, and airlines can make use of a more detailed passenger manifest to monitor their flights as they begin to fill up.

"If the flight is actually boarding and a passenger is running a bit late, they’ll get a friendly message that says ‘Flight boarding from gate 22’, for instance," says Walker. "So firstly, they know they need to get down to the gate as soon as they can once they’re through security, and secondly they don’t have to try and find out which gate they’re going from, as we’re telling them that in advance."

PASS: the basis for Positive Boarding

The system underpinning Positive Boarding at Heathrow is the Passenger Authentication Scanning System (PASS), designed and implemented by Atkins in partnership with Heathrow. The system, which has previously been paired with infrared facial recognition technology to link a passenger’s boarding pass to their photograph (ensuring international passengers can’t swap passes with domestic travellers to sidestep border controls), provides the underlying functionality that makes Positive Boarding possible.

"Messages are sent both to the passenger and the relevant airline."

As well as laying the foundations for future biometrically-driven self-boarding functions at Heathrow (which were trialled in Terminal 1 in March this year), PASS and its associated workflow engine tie together the separate systems used by the airport and airlines to allow Positive Boarding data to travel where it needs to go. Unsurprisingly, building an open data environment that facilitates this cross-system communication is a complex process.

"You’ve got PASS driving the capture of data from barcodes and running the biometric cameras and connecting to automated gates, and then you’ve got a behind-the-scenes layer that PASS talks to, the workflow engine, which takes the data it’s given and executes its rules and workflow," says Atkins principal consultant Andy McCue-Brown.

"But to do that it needs other data sources, such as a feed of the live flight data, so if I scan my boarding pass an hour before my flight at security, it will decode the barcode, work out what the flight is, know that it’s on time and I’ve got an hour, and send back the message that I’m on time, all driven by the workflow. So it relies on different data sources to help evaluate what it should tell the passenger and the operators of the system."

Atkins project director Nick Whitehead continues: "What you’ve got is a bunch of technical complexity that’s to do with connecting to the other data that lives within the airport, but also then connecting between the airport network and the airline network, and making sure that the information is visible in both places."

For Walker, PASS stands at the centre of many of the innovations that Heathrow is trying to bring to its passengers and airlines. "It’s the brains behind how all of these various components work," he says. "We’ve gradually developed that product into something that allows us to control access to our airside environment at Heathrow, and will, in the future, drive how we actually operate things like our self-service boarding gates, and will interface with self-service check-in kiosks and bag drops as well. So it will effectively tie all that information together and provide a wealth of joined-up data for us around how passengers are using our airport."

"The airline can see the report as it gets close to flight departure time."

Heathrow and its partners have clearly gone to great lengths to implement the Positive Boarding programme as part of a wider data-driven system. But what operational and financial benefits will make that investment worthwhile?

The benefit for passengers is obvious, with extra information smoothing their journeys through to boarding gates. For the airport and airlines it serves, the true incentive to roll out Positive Boarding is to improve departures punctuality, which Walker describes as "a number one capability indicator for airlines and airport alike".

Messages to passengers should help chivvy latecomers towards their boarding gates, but another key feature is much earlier detection of passengers who have no hope of getting to their flight on time. The Positive Boarding system is able to identify when a passenger has missed their chance to board, and allows the airline to address the problem more quickly.

"The airline can see the report and as it gets close to flight departure time, they should hopefully see mostly green rows as their passengers converge on the gate," says McCue-Brown. "But they can make better decisions about offloading passengers who are not going to make it, because if you’re 20 minutes before the flight and they haven’t been seen, they’re not going to make it in time. They can make decisions about offloading bags and reduce delays, which obviously cost everybody a lot of money."

The system is also flexible enough to adjust its timing calculations based on real-time flight information, so more time is allotted to passengers if a flight is delayed. And for special events, the whole equation can be altered without having to make modifications to the underlying software.

"If you have the Olympics coming, like we did last year, you might want to change the test to see whether a passenger’s got enough time to get to their plane, because the airport is expected to be much busier," Whitehead says. "So you could go into the workflow and just change the way in which that test is developed, but only for the two weeks of Olympic travel. And then the system would revert back to the way it worked before, and you wouldn’t need to change any software."

Heathrow is working with its initial Positive Boarding partner airlines to gather data and quantify the operational benefits of the system; Walker says the airport will have enough data from Virgin’s Positive Boarding launch to give specific percentages on the advantages "within the next month or so".

Positive Boarding is due for its next deployment in Heathrow’s Terminal 4, along with the expansion of the service to new airlines at T1 and T3. By early 2014, Walker expects to have the programme installed at all of its terminals bar T5 (which has its own bespoke system for British Airways), and by the time the new Terminal 2 opens, it will be a "business-as-usual process for our airlines".

Projects such as Positive Boarding and smart data systems like PASS bring Heathrow into line with the global vision for future airport operation espoused by IATA and countless other first-tier airport operators. Self-boarding, biometrically-enhanced security and a host of check-in options have taken firm root at Heathrow and other airports globally.

There are still technical and political hurdles to overcome before these innovations become part of everyday airport life – and both Atkins and Heathrow agree that many of these technologies will be options for passengers, rather than replacements for staffed services – but thanks to intelligent data management and forward-thinking technology trials, the airport of the future feels closer to reality than ever before.