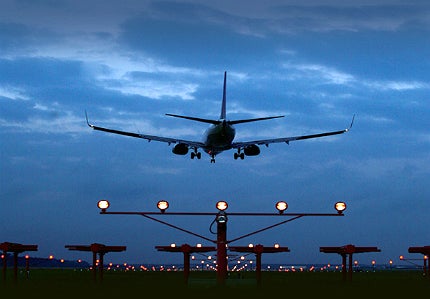 The fire was contained and no casualties have been reported. However, the cause of fire is yet to be identified.

Delays have been reported at airports around the globe due to a computer glitch on a Sabre airline check-in service, which caused a major backlog.

Airlines including American, Jet Blue, Frontier, Virgin America, Qantas, British Airways and Virgin Australia were affected by problems with the Sabre booking and check-in system, which is now back online.

Southlake-based Sabre Holdings spokeswoman Nancy St. Pierre was quoted by the Sydney Morning Herald as saying that the reason for the failure is not known.

The US Federal Aviation Administration (FAA) has deployed a new time-based flow management (TBFM) system at 20 en route centres, as part of its efforts to optimise aircraft flow in the nation’s crowded airspace.

Work on the project is being carried out as part of the $331m DCIS contract won by Harris in September 2012, to assist the FAA in integrating its end-to-end data communications system.

DCNS will assist to transition the US air traffic control (ATC) from analogue voice communications to digital data connectivity, which would boost the efficiency and safety of the country’s ATC system.

According to tests conducted by Nasa since 2011, the new software would help fill around 80% of slots in the constant overhead stream of air traffic that typically remains vacant due to timing issues.

The research will address the gaps in aviation systems technology created from the operational challenges of the Next Generation Air Transportation System (NextGen).

As part of the deal, Saab Sensis, together with Metron Aviation, AeroControl, Calspan and Cognitive Systems Engineering, will carry out fundamental and applied research, technology development and systems analysis in airborne and ground-based systems that play a vital role in flight safety, air traffic management and control.

The improved FODetect is capable of detecting birds in real time, in severe weather and in all light conditions.

According to reports, more than half of bird strikes occur during night time, costing the aviation industry millions of dollars.

Changi Airport Group (CAG), the operator of Changi Airport in Singapore, has revealed concept plans to build a mixed-use terminal as part of its efforts to double capacity.

Called ‘Project Jewel’, the new facility will be built on the car park site facing the Terminal 1 (T1).

Construction on the project is expected to begin soon, with planned completion for the mid-2020s.

Designed by a consortium of consultants led by Moshe Safdie, including Benoy and local architects RSP, the new facility will incorporate aviation and travel-related facilities, concessions and leisure attractions.

London Heathrow Airport gears up to use synthetic aviation fuel

INDMEX Aviation, a developer of airport and surveillance solutions, has collaborated with OPEN Incorporated, the creator of the SafetyPAD suite for emergency medical services (EMS), to provide an integrated airport EMS incident response system.

OPEN SafetyPAD Operations director Scott Streicher said that SafetyPAD is already deployed by fire and EMS teams at some of the busiest airports globally.