On 14 May, the UK transport secretary made a bold announcement: the first-ever net-zero transatlantic flight will take to the skies next year. Speaking to industry leaders in the US, Grant Shapps said the test flight will be powered by 100% sustainable aviation fuel (SAF), a low-carbon fuel made from waste products such as used cooking oil.

“This trailblazing net-zero emissions flight, a world first, will demonstrate the vital role that sustainable aviation fuel can play in decarbonising aviation in line with our ambitious net-zero targets,” said Shapps. “That’s not just great news for the environment, it’s great news for passengers who will be able to visit the Big Apple without increasing damaging greenhouse gas emissions.”

The flight will be supported by up to £1m of competition funding and comes courtesy of an industry-government partnership called the Jet Zero Council. It is part of a broader effort to kickstart the UK SAF industry, which includes £180m in government funding to develop new production plants.

“This is an apt opportunity for the UK to double down on its SAF credentials and really cement its place as the leader in production and use of SAF,” says Bhanu Choudhrie, founder of Alpha Aviation Group. “News of the first transatlantic flight by an aircraft powered 100% by SAF is a momentous happening for the future of aviation.” 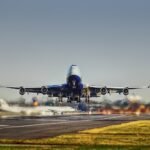 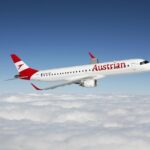 Momentous it may be, not to mention great PR for an industry working overtime to recover from the pandemic. But will the announcement really, as the accompanying press release would have it, ‘usher in a new era of guilt-free flying’? Or should eco-conscious passengers hold off on booking their round-the-world trips for now?

How could SAF improve aviation emissions?

As things stand, the aviation sector is responsible for 2-3% of global emissions, and the figure is growing. According to 2019 data from Atomsfair, a return flight from London to New York generates around 986kg of CO2 per passenger – equivalent to boiling a full kettle over 14,000 times.

In the absence of any policy development, global aircraft emissions are forecast to triple by 2050 – a far cry from IATA’s goal of reaching net-zero that year. However, if every flight ran on SAF instead, the total would drop significantly. IATA thinks that SAF could account for around two-thirds of the emissions reductions needed.

SAF is produced from sustainable feedstocks, such as cooking oil, municipal waste, agricultural waste, and non-food crops. Compared to using conventional fossil jet fuel, using SAF cuts emissions by around 70-85%. It could be a valuable medium-term solution for aircraft, as it doesn’t require any infrastructure upgrades.

“SAF can be produced through various by-products and can be blended with conventional fuel, which means that existing aircraft do not need any modifications to use these fuel types,” says Choudrie.

“Many strains of SAF often contain lesser aromatic components, enabling them to burn cleaner in aircraft engines and improving the aircraft’s performance.”

Until now, aircraft have mixed SAF with standard fossil fuels in a 50-50 ratio, for safety and technical reasons. However, the UK’s test transatlantic flight will use pure SAF in combination with (unspecified) greenhouse gas removals, in order to reach net-zero.

“How they reach net-zero will depend on the kind of SAF they are using,” says Manosij Ganguli, an aviation expert from the Mission Possible Partnership. “For example, if you are using a SAF with an emission reduction profile of 75%, then you will have to put in a carbon neutralising mechanism, such as carbon capture, to take out the remaining 25%.”

Choudrie adds that, while SAF stands to be a critical piece of the net-zero puzzle in aviation, there are several other aspects that will need to come together too. These include improvements to airframes and powerplant technologies, along with the much-touted switch to electric aircraft.

An industry in its infancy

A shift towards SAF, then, would undoubtedly be a positive step for aviation. Over the last few years, a number of industry bodies and governments have set goals in this arena. Members of the Oneworld Alliance (British Airways, American Airlines, Finnair, and Qatar Airways among them) are targeting 10% SAF in their fuel mix by 2030.

The problem, for now, is that SAF usage remains low, standing at just 1% of global fuel consumption. That means it will require dramatic scale-up – IATA estimates that we will need 450 billion litres of SAF every year by 2050, from just 100 million litres today. Very likely, that scale-up effort will entail more than just government mandates.

To date, SAF is simply not cost-competitive with kerosene. The International Energy Agency (IEA) says it can cost between $0.85-$1.50 a litre, compared to $0.50 a litre for conventional jet fuel. If you’re an airline trying to decide between SAF and carbon offsetting, you’ll probably choose the latter as it’s cheaper.

In the absence of guaranteed demand, fuel producers are reluctant to invest in new SAF plants. This means airlines that do want to use SAF may struggle with supply, creating what Ganguli calls a ‘chicken-egg situation’.

“Energy companies might be able to produce the SAF but will there be takers for it right from day one?” he says.

“You don’t just turn on a switch and start getting SAF available in the UK – there needs to be a run-up to that. And during that run-up, how do we get the industry, i.e. the fuel producers, the airlines, to play together and ensure that everything is moving as planned?”

Choudrie thinks there are a few key challenges hobbling increased take-up of SAF. These include low numbers of refineries operating at commercial scales, an inconsistent stream of raw materials, and a lack of incentives designed to drive its usage.

Although the problem will need to be tackled from multiple angles, tax breaks and government subsidies could be part of the solution.

“There is need for an early-stage subsidy scheme to allow airlines to switch to SAF on a regular basis instead of forcing them to pass on costs to consumers,” says Choudrie. “The creation of blending targets, and the entry of influential oil and gas players, will provide further impetus to deploying existing infrastructure for SAF production.”

He remarks that the UK has shown a lot of seriousness in throwing its weight behind SAF adoption – government support, along with a stream of encouragement to private players, is helping to popularise its usage.

“I believe that for the SAF industry to develop, it is vital that all stakeholders come together and really put their collective might behind championing the uptake of these alternative fuels,” he says. “SAF is here to stay, and I believe there will be a very large market for it over the next couple of decades.

At Mission Possible Partnership, Ganguli has been mapping various scenarios around what the future of aviation could look like. He thinks that while the net-zero dream is certainly possible, it will require making changes across the whole aviation ecosystem.

“Yes, we will be getting very close to guilt-free flying in the late 2040s and 2050s, but there are still question marks about whether it will be totally guilt-free – i.e., no emissions associated with the aviation sector,” he says. “It depends on which pathway the world chooses – or the market, along with the policy end of the spectrum, chooses.”

The picture over the long-term, then, is relatively hopeful, albeit with lots of different factors hanging in the balance. And in the short-term, a transatlantic test flight run purely on SAF is an exciting milestone for the industry. However, with SAF still far from the norm, we probably shouldn’t get too carried away with the ‘guilt-free’ rhetoric.