Airports around the world have suffered significant drops in revenue as a result of travel restrictions enforced by the Covid-19 pandemic. In an attempt to redress losses, many airport operators have proposed cuts to the salaries of some workers and lay-offs for others.

In response, workers have organised protests against these plans. Strikes have been called in countries including France, Italy, Portugal, Spain, Sweden, the US, and even Iran. It comes at a time when national governments are keen to get international travel markets moving again to bring in much-needed consumer spending to areas hard hit by a lack of tourists. However, dissatisfied airport workers are not afraid to voice their disapproval of proposed changes to wages and working conditions.

In the UK, aviation has been one of the sectors hardest hit by the pandemic. The number of flights declined dramatically in 2020 as the travel market largely shut down.

The UK’s largest airport, London Heathrow , has seen several strikes or threats of industrial action this year. In March, the airport was facing a total of 41 strikes across 23 days from different sectors of the airport. Coordinated action would have begun on Good Friday, 3 April, involving engineering, airside and landside operations, and central terminal staff, as well as security and fire service personnel. Each sector would undertake seven days of strikes across the 23 days. 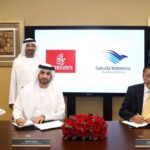 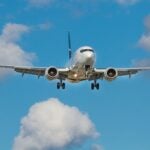 Analysis
US sets 2050 target for net-zero emissions in aviation

However, the industrial action was averted following an offer by Heathrow of possible 5% pay rises over two years, along with an agreed review of working conditions and hours for particular sectors. Nevertheless, there remain real concerns among airport workers about the future of the aviation sector and the long-term impacts of Covid-19.

On 23 June 2021, trade unions representing UK airport workers organised the nationwide Travel Day of Action. The organisers arranged a protest outside the Houses of Parliament in Westminster that brought together a diverse mix of workers throughout the travel industry, with representatives that included baggage handlers, airlines, and pilots, to travel agents.

“UK airport workers have been fearful for their futures since the pandemic began.”

One of the aims was to pressure the government into doing more to support the safe return of international travel in time for the peak summer getaway period with a clear strategy. On the same day, similar action was also taking place in Edinburgh, Belfast, and Cardiff.

Unions have accused the UK Government of not doing enough to support the aviation industry, claiming that government support in the UK was lower than other nations in Europe. As a result, unions claimed this put UK aviation at a disadvantage compared with European competitors.

In addition, unions called for the UK Government to extend the furlough scheme until April 2022 to protect workers’ jobs as the sector recovers from the financial impacts of Covid-19. One of the organisers of the day of action was the union UNITE .

“UK airport workers have been fearful for their futures since the pandemic began, as it has had a catastrophic effect on UK and global aviation. Since March 2020, UNITE has been campaigning for additional support to be provided to the UK aviation sector in line with what other major European countries have provided,” states a UNITE spokesperson.

“The failure to have provided specific sector support to aviation means that the UK aviation sector is far more vulnerable to cuts than its rivals in other countries.

“UNITE has consistently called for the extension of the furlough scheme for aviation workers until April 2022 and a failure to do so risks the unnecessary loss of skilled workers in the short-term, which will delay the long-term recovery of the sector and [damage] the UK’s economic interests.”

“The Travel Day of Action saw the entire aviation and tourism industry, employers and workers, standing together to demand a clear plan from government on reopening this vital sector safely while supporting jobs.”

Unfortunately, since then, we have seen more chaotic decision-making with countries being moved between lists at random and no long-term plan for supporting the industry in the recovery phase,” says Prospect deputy general secretary Garry Graham.

“With the summer effectively lost for the aviation sector, we urgently need the government to agree targeted support packages to maintain jobs until traffic levels return, including the extension of the furlough scheme within the sector.

“With the appropriate support and investment, this is an opportunity to build back our aviation sector in a greener and more sustainable way.”

A UK Government spokesperson said the government would continue working with the aviation sector to help find a way through this challenging period. However, the spokesperson did not directly address the unions’ demands to extend the furlough scheme for aviation until April 2022.

“We know this is a difficult time for the travel industry, which is why we are providing an unprecedented package of support to protect jobs and businesses,” the spokesperson said.

“Businesses across the economy including the travel industry can draw on £350bn worth of loans, rates relief, VAT deferrals, and the furlough scheme. We estimate that by the end of September 2021 the air transport sector will have benefited from around £7bn of government support.”

In Scotland, air traffic controllers in the Highlands and Islands have been striking this summer over plans to move air traffic control (ATC ) operations to a centralised hub in Inverness as part of the Air Traffic Management Strategy (ATMS).

Unions claim these plans will lead to job losses for skilled workers.

ATMS plans are being led by the Highlands and Islands Airport Limited (HIAL), which is a private limited company owned by the Scottish Government . HIAL owns and operates a total of 11 airports in the region.

The five airports affected by the ATC centralisation plans are Dundee, Inverness, Kirkwall in Orkney, Stornoway in Lewis, and Sumburgh in Shetland. Under the plans, ATC for these airports will move to an industrial estate in Inverness.

HIAL claims the ATMS will help ensure the ‘long-term sustainability of air services’ and ‘deliver more resilient and safer air navigation for decades to come’. HIAL wants existing workers to relocate, but this has been met with resistance and could result in 50 workers losing their jobs.

Industrial action over the plans has been taking place on and off since January, coordinated by trade union Prospect, which represents ATC workers. Strikes on 29 July saw six out of HIAL’s 11 airports shut for 24 hours.

“It is Prospect’s hope that this strike, coupled with the ongoing industrial action short of a strike, will be enough to persuade HIAL to cancel its damaging plan to remove jobs from some of Scotland’s most remote communities. Failing that the Scottish Government , which has so far failed to even engage with local politicians on the matter, has the power to step in and mandate a rethink,” adds Prospect’s Garry Graham.

“Our members are not averse to change. We are seeking for HIAL to engage in serious and meaningful discussion with staff and local authorities about the strategic direction of the project to put in place a solution, which brings in the safety improvements we all want to see while protecting local jobs and economies.”

HIAL said that as a public body, it is subject to the Scottish Government ’s ‘no compulsory redundancy’ policy. In addition, the company said there would be no reduction in the number of jobs in the ATMS. If anything, the plans could result in the creation of new jobs.

“Our air traffic colleagues are highly valued members of our team, and our priority is to retain them within HIAL. We have worked with Prospect over several months to agree a number of policies to support our colleagues’ transition to our air traffic management programme. We remain in dialogue with the trade union and have asked that future industrial action is delayed until discussions on these policies have concluded,” says a HIAL spokesperson.

“There is agreement between our air traffic teams and their trade union representatives on the need to modernise HIAL’s air traffic management system.”

A Scottish Government spokesperson responds: “The decision to modernise air traffic control will ensure that air services can continue in the future.

“The option chosen by HIAL in 2018 will improve resilience, safety, and reliability of services. It remains the case that no alternative has been proposed that addresses the issues that the ATMS programme aims to resolve.

“HIAL continues to engage with its staff, unions, airline customers, and other interested parties as the programme is implemented.”